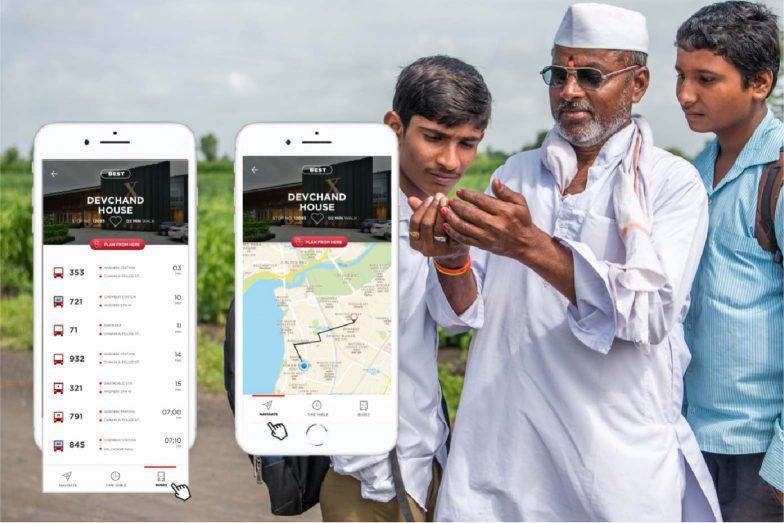 The brief was to provide real time data from the buses to commuters to keep them better informed and make their commutes easier to plan. This would be the first step in a roadmap to a scalable, easy-to-access transportation system.

The Fractal Ink team carried out extensive research with BEST customers.  Around 2-3 focus groups were used to build the initial hypothesis and then 75+ personal interviews were carried  out to generate insights. These were some of the findings:

All of the above were exacerbated when bad weather set in.

Fractal Ink developed an Android mobile app that provides the user with real-time data on bus location. The buses are fitted with relaying equipment that transmit real-time location data to the app.

While the app works on Smartphones, it has been tested with the lowest phone variants available in the market. Data usage is low as it only uses data for bus status and the mode of transfer is through text data only. All other features work in offline mode. The app is light on storage and only  takes up about 20MB of space.

The information is displayed in a Google card- like fashion that is visual and easy to understand. The commuter can enter the route number which is most likely in the case of BEST or  his start and end destination. Each card then shows the duration of the ride, connections needed, walk times to destination, along with the estimated time of arrival.  The real-time location of each bus on the route is also displayed.

Based on the research, a feature that sounds an alarm before the destination was also incorporated to cater to those who wanted to nap on their journey.  Users can also submit details of lost items via the app. For more advanced users and tourists, there is the capability to plan city itineraries.

Under development is a feature that will provide the seat status of each bus is also displayed so the commuter can decide whether to take a bus, or wait for the next. Ticket purchase is on the roadmap, but not available currently.

The app is currently available in Hindi and English but the use of text was kept to a minimum and a more visual, icon-based approach employed. The FI team studied the current way that BEST communicates offline  to deliver information. They identified the minimum set of instructions that commuters look for while making a decision, which was Bus number, Time, Type of bus and some basic latin letters like LTD(limited) that were understood by the consumers. Hence rather than relying on route (start and end destinations) like most travel apps they used Bus numbers as the most prominent identifiers. The icons were verified through user testing.

An interesting aspect of the UI approach was the use of icons that straddle both the physical and digital worlds. For example, the images used to indicate non-air conditioned vs air conditioned vs electric buses on the app are also used on the bus-stops.  The FI team believes this integrated approach is the best foundation for a robust and scalable design system.

A Dark mode was offered right from the start, allowing users with visual impairment to switch to a high-contrast mode.

FI’s approach to modelling the user experience was as follows:

Predictive grid modelling: Based on the user’s mental model, the interface was divided into grids to make the most likely action and most useful information available instantly

Intent modelling: The content hierarchy was modelled based on user intent: the majority of users were looking for buses near them to reach a destination. Users can just tap to repeat functions on existing or frequently travelled routes to reduce keyboard entry or typing while standing in a crowded set up.

Pattern modelling: The Fractal Ink team studied common usage patterns amongst users and applied these to the interface. All actions had to be obvious. For example, making a whole row in a list item clickable rather than just an arrow.

Search: The most important feature

Given that the most important function for a user is to search for buses,  this feature is placed upfront and enables the user to either search by destination or by the route number if she knows it.

The Search results page and organization of data on it was a critical part of the design exercise.  All nuances that influenced decision-making had to be captured in a single screen. The results appear in visual cards that are easy to understand. Each card shows the duration of the ride, connections needed and walk times to destination, along with the estimated time of arrival.

The app currently has over 100k+ downloads on the Play Store.

In the service business you are responding to client briefs most of the time. BEST is one project where we got the opportunity to only think about how the app would affect users and how it would make a difference to their lives. Also the scale at which it would be used appealed to us. As a designers you always crave for that kind of attention to the products you have designed. BEST gave us both the freedom and opportunity to make that mark which is why it holds a special place in Fractal’s portfolio. One usually holds a very stereotypical  view about government bodies, and almost believe that it is going to be tough to make them understand design. To our surprise BEST was more than accepting to our suggestions and design and changed our whole perception of working with the Government.