Block will ‘tie together’ Square, CashApp, Spiral, Tidal, TBD and whatever new company / brand that Dorsey may announce in the future. This mirrored Mark Zuckerberg’s announcement of Meta earlier this year – the corporate brand that will integrate Facebook, Instagram and Whatsapp. (We did a deep dive into corporate vs product brands here).

Both Block and Meta are brilliant naming moves.

They make their intentions and focus clear, yet are broad enough to encompass a wide range of brands and products.

When it comes to the design of their identities however, Block is the clear winner.

The Growth of Symbology

In a world that has grown comfortable expressing the deepest emotion through a tiny emoji, the importance of symbology in brand communication can only escalate.

The human brain processes visuals 60,000 times faster than the time it takes to decode text. Given the torrent of information we must face everyday, this will only fuel the need to ‘own’ high-recognition symbols.

For the longest time, the brand world enviously held up the Nike swoosh, as the only example of a symbol that was recognisable across the world without the brand name. This is changing fast, as brands from Mastercard to Starbucks drop the names from their logos – a move that indicates confidence that their symbols have now gained universal recognition.

To achieve this nirvana of brand recognition, however, the first requirement is a visually distinct and memorable symbol.

Who Wore it Better?

Block’s multi-faceted silver cube is distinctive and based on a set of relevant concepts. In this tweet, the company’s handle said “Block references the neighbourhood blocks where we find our sellers, a blockchain, block parties full of music, obstacles to overcome, a section of code, building blocks, and of course, tungsten cubes.”

For the uninitiated, tungsten cubes are hot collectibles amongst the crypto community. Amongst the world’s heaviest elements, a 4-inch block of Tungsten, which would fit in the palm of your hand, weighs close to 20 kg.

Ever looked for a laptop emoji? The emoji you will see is based on the device you are using. Once Unicode, the consortium that controls emojis, approves a new emoji, each operating system is free to customise it – and plug its own ecosystem in the process.

The digital world offers ever-expanding avenues for brands to own symbols and the space they signify – see the example from Samsung below that uses a branded Twitter hashtag and emoji.

In this scenario, Block’s morphing, twisting cube with its rainbow gradient stands out. It feels like it was born of — and for — the digital world. Its meaning and territory can be gleaned at a glance. Interestingly, the logo‘s animated form is considered the primary version, with static versions only to be used when required.

Even the leadership page with its somewhat bizarre imagery that excited much debate, is fulfilling a key requirement of the Internet – meme-ification.

Someone has actually created a tool where you can ‘blockify’a photo – maybe not the result Team Block had hoped for, but certainly fuelling the buzz and sharing.

Of course, Facebook’s might and distribution could well see a scenario where Meta’s logo comes to symbolise the Metaverse for the human race. But for now, in a world where polyglottic communication is becoming increasingly important for brands, owning a memorable, meaningful symbol is a good foundation for brand identity. 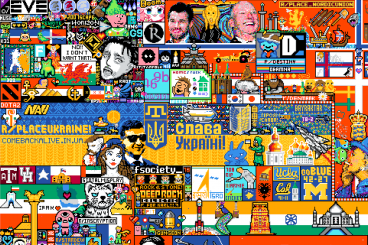 Heads Up For Tails: Building a Brand in an Unbranded Industry