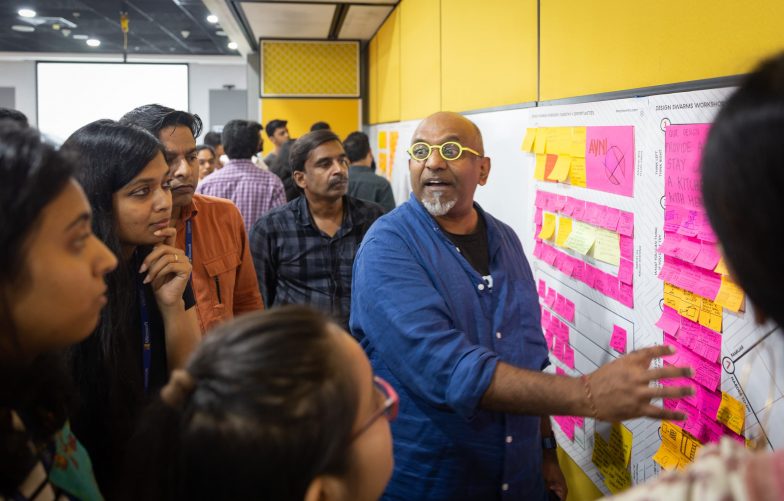 Can design thinking save the world? A lot of designers seem to think so, but none more than Surya Vanka, Founder and Chief Designer, Authentic Design, Seattle. He was running Design Swarms, a process he conceptualised to make design thinking accessible for all: experience no bar. Vanka is an educator and previously directed UX at Microsoft. He was part of the team that organised Microsoft’s first company-wide hackathon, the result of which was a wheelchair for ALS patients that could be operated with just the eyes.

Often spotted in neon glasses and a bowler hat, Vanka seems to enthuse instead of speak.

“The ability to innovate on demand is a valuable skill for the 21st century,” he declared at the beginning of the workshop. “We have thousands of wicked problems, but billions of creative minds.”

Vanka’s boisterous optimism was infectious and also necessary: the workshop was an incredibly extroverted (“No shy people. This is not a spectator sport!”), high-energy, high-speed event that lasted about eight hours.

“It’s a systematic series of steps that takes a jumble of ideas into a single outcome,” says Vanka, gesturing towards three large charts attached to the wall behind him. “It’s like a game board, a lego kit that anyone can use.” The charts are filled with grids plastered with orange and pink post-its of all sizes, the product of a previous workshop, where participants were developing solutions for an opioid epidemic in Ohio.

The anchoring principles of this method are few, but binding: Put people first. Defer judgment. Think visually. Thrive on chaos and urgency. Embrace incomplete information. Work fast. Encourage wild ideas and build on the ideas of others.

Our task was to find a way to keep Indian homes cool. Participants were urged to look to the past for inspiration, like Ant Studio had done with the CoolAnt, and also consider enlisting the opportunities offered by digital technology. A team from Ant Studio was present to give a very brief introduction to their work and also provide guidance along the way.

After a nine minute team building exercise (introductions, name and logo design and listing ‘superpowers’ on post-its), teams proceeded to develop a picture of the end user (usually a real person known to somebody in the group). My group picked Pankaj, an elderly, ailing man in his 60s living in a small house in Mumbai, who keeps himself cool by splashing water on the floor of his house twice a day. The morning went into describing Pankaj, outlining his daily activities and highlighting key moments of conflict. He needed an affordable cooling solution that didn’t require physical exertion. Then it was one quick, timed exercise or discussion after another, to ideate, analyse, and finally arrive on one possibility to eventually pitch.

Vanka suggests that Design Swarms work best in groups of five to seven people and teams of 18-24. More experienced teams of designers tend to spend around six to six-and-a-half hours on a single problem. According to Vanka, Design Swarms has been taught around the world, with applications in solving opioid epidemics, disaster relief and homelessness.

Eventually, my group came up with electronically refrigerated blankets.

How far an idea can go is up to logistics, luck, funding, and marketing among other things. But all that comes later. Swarms are meant to trigger right-brain creativity to produce ideas prolifically, not create a finished product, like with hackathons. “Criticising is easy, creativity is hard,” said Vanka often during the day.

We are living in an age of ideas where things change dramatically from day to day. Today’s world is shaped by hackers, makers, tinkerers and inventors. It may just be saved by ordinary people learning design thinking.