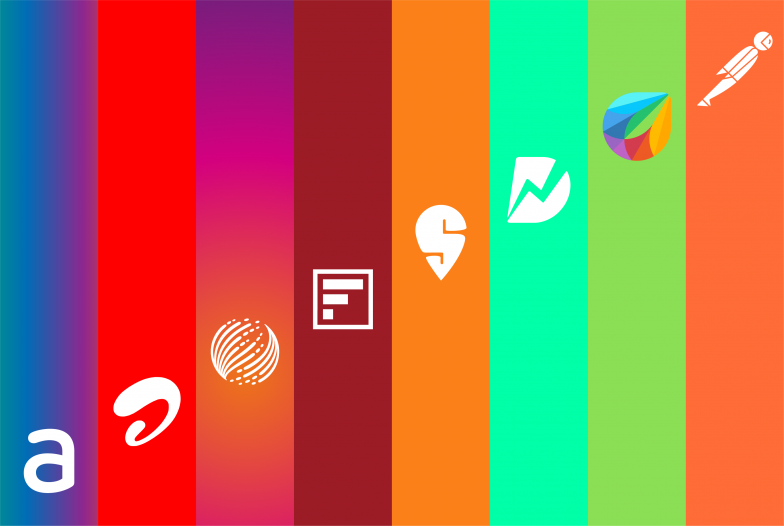 A week ago, David Perell, founder of writing course, Write of Passage, tweeted this image with the question, “Why do all logos look the same?”

The image he tweeted is not new and has done the rounds on nearly every social media platform. In fact, there is another popular one about the Tech industry.

The question clearly touched a chord with Perell’s vast Twitter following, who commented and retweeted it more than 200,000 times!

The interest the tweet generated got us thinking about Indian logos: Have they all started looking the same?

We looked across sectors at Indian logos designed after 2010, from the big conglomerates to IT, telecom to financial services and food delivery to SaaS.

Here’s what we found in one image.

While recent Indian logos mirror the global movement towards sans-serif typefaces, they have thankfully still managed to avoid a complete loss of character, perhaps because of our deep-rooted love for pictorial symbols.

Even in fashion, where there has been an alarming degree of standardisation in global brands, Indian brands still retain their quirkiness and haven’t rushed to change. A common element may be serif typefaces, which are strongly associated with luxury, but most brands still incorporate a signature symbol.

Why the Rush for Homogeneity?

There has been much speculation around the reason for this global blanding movement. Perell himself puts forth these two guesses:

1) Software: Designers all use the same tools, which exert the same unconscious forces on their creative process.

2) The Internet: Aesthetic diversity is bound to decline in such a hyper-connected world.

A more design-specific reason is that sans-serif fonts are seen as cleaner, more youthful/friendly and easier to use on digital interfaces. This movement to sans serif gained significant momentum with two rebrands: Citbank to Citi in 2007 and Google’s stripped down brand identity in 2015.

While the popular opinion is that sans-serif fonts are better for screen reading, there are as many arguments against this belief as there are for it.

When we look back at the last decade, we can see that it has been one of ‘less is more’ – a sentiment that is reflected across our lives, from uncluttered UI to ubiquitous greige minimalist architecture and even a whole Kando-spurred movement devoted to tidying up.

Of course there are strong functional reasons that underpin this. Standardisation in the physical world makes makes it easier to produce, ship, stock and replace objects. But as the excellent Twitter handle, The Cultural Tutor puts it “Traditions are built up over time. Modernisation happens suddenly. Decades, centuries, millennia – swept away in the blink of an eye.” Never before have we been in such acute danger of that happening.

Did we miss any Indian logos designed after 2010? Let us know in the comments