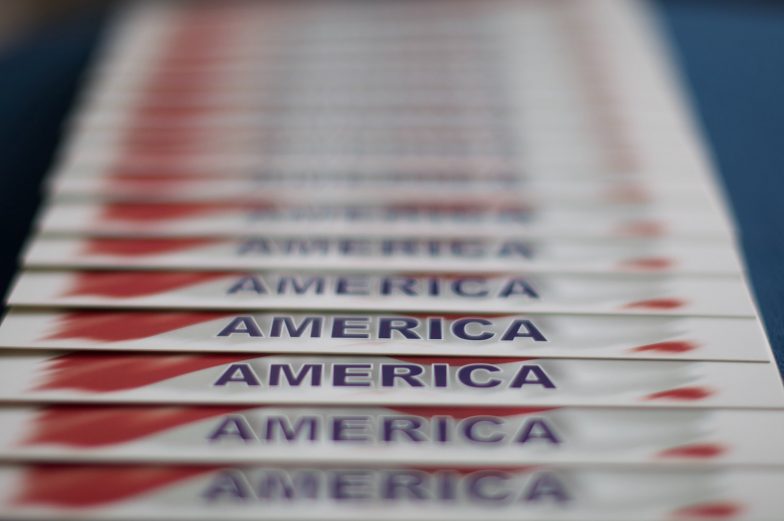 The rallying cry of ‘Make America Great Again’, which evolved seamlessly to ‘Keep America Great in 2020,’ has perhaps been Trump’s best marketing move. More than just a tagline, it continuously found its way into Trump’s speeches and the message of returning the country to its former glory resonated among his core base. The line worked across various facets – be it the economy, America’s standing in the world, or more controversially, demographic composition.

One of the key mistakes brands make is to have an empty slogan. Trump’s was anything but.

In contrast, Biden does not have a memorable, counter message. His campaign includes more than one slogan like ‘Restore America’s Soul’, ‘Build Back Better,’ ‘Battle for the Soul of the Nation’ and ‘No More Malarkey.’

Trump was not the first American Presidential candidate to use the phrase, but he owned it like his predecessors never did. (The slogan is derived from Ronal Reagan’s 1980 campaign). There’s a marketing lesson in there.

While Trump’s campaign is visually less slick, Design Bridge designer, Maris Hargerty said in this article that his voters would resonate with it because “They don’t want a president who follows any rules – of design or of politics.”

Trump’s campaign focuses on him alone and the imagery is about power and authority – both attributes that are likely to appeal to his core target base, who are disillusioned with career politicians.

Everything about Biden’s campaign – from the images to the slogan – has been about doing things together and collaboration. Kamala Harris is shown as a prominent part of the campaign. Biden’s campaign imagery, across channels, shows everyday Americans of various shades rather than focusing on one person who can fix everything.

Both campaigns play to their audiences and act as good studies in contrast, of how imagery can bolster a key product message.

Trump’s campaign has demonstrated a singular focus on developing and making it easy to buy merchandise. The ‘Make America Great Again’ (MAGA) hat, once just a prop for Trump, resonated massively with his core base. No other presidential candidate has ever worn a cap and this just added to Trump’s anti-establishment image. It was eventually launched for public purchase in 2016. Today, the hat with has become a universally recognised symbol of what Trump and Trumpism stands for. The subsequent ‘Keep America Great’ merchandise in 2020 has been equally successful.

Unlike Biden’s site that offers a quiet ‘Shop’ link in the main menu, the Trump site has a prominent Shop section to encourage visitors to buy merchandise.

The same philosophy is evident in their Facebook pages. Biden has a standard “Sign Up’ link, while Trump’s CTA is ‘Shop Now.’

The Trump app is beset with charges of unfair data collection and use but what it does well is the ‘gamification’ of the experience. The New York Times article says that “A Trump army member who accumulates a hundred thousand points by sharing contacts or raising money is promised a photograph with the President, while other members can use points to get discounts on MAGA gear.”

Both campaigns understood the importance of using influencers and gave them ammunition and legitimacy. Arguably, the Trump campaign did this better – from hosting key internet personalities at the White House, to giving them airspace on his social media profiles or even elevating them to roles within the administration. As a result, the last four years has seen the build-up of a formidable and influential ‘Pro-Trump’ network, across Instagram, YouTube, podcasts, Reddit and Gab.

The Democratic side has also come a long way, taking advantage of the fact that most film stars, musicians and digital personalities are likely to be liberal in their outlook. Through the campaign trail, Democrats have been visible (and audible) across formats ranging from late-night shows to podcasts. Biden himself made himself (and his social-savvy grand-daughters) available for interviews with Instagram influencers, and collaborated with others on the fan-requested video platform Cameo for fundraising. Other flash-points include a virtual reunion of the cast of The West Wing.

The takeaway from both campaigns: Your message can be amplified by those who strongly believe in your cause. Use this to your advantage.

Update January 20th, 2021: The best marketing and design is of no use if the product is fundamentally flawed.