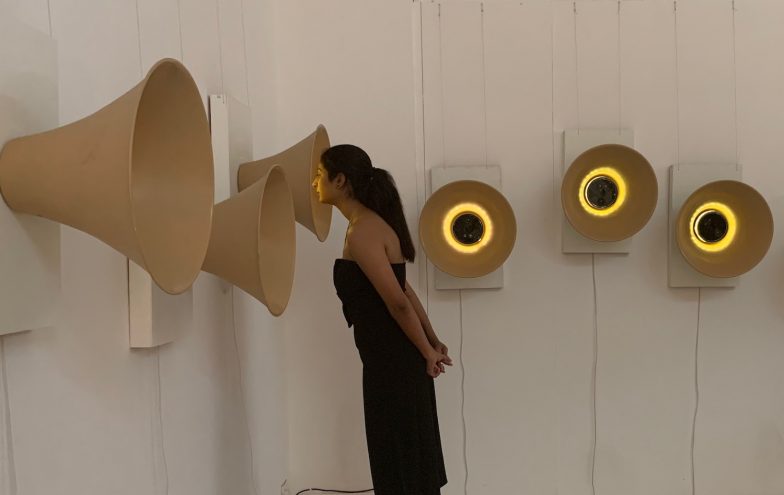 A scent is often the trigger for a detailed memory or an intense emotion and the reason is entirely scientific. Scents are received by the olfactory bulb in our brain, which is directly connected to the amygdala, the nervous centre for emotions and memories. This connection underlies the project ‘Sniffing Out The Differences’, which won the Red Dot Award for Brand and Communication in 2020.

Sahu says that not only does she have a heightened sense of smell, she has always been interested in the connection between smell and human emotions. In 2017, she won a grant from the Prince Claus fund for a multi-sensory project to question identity, with olfaction playing the primary role. A team of friends and fellow designers came together to form a collective and create a series of installations that used smell to build narratives and question what identity means in a globalised world.

There are five installations and each employs its own set of olfactory experiences for storytelling.

The massacre at Jallianwala Bagh at Amritsar in 1919 was an inflection point for India’s freedom struggle and the reforging of an independent identity. To retell this oft-told story in a new way, the team created a semi-circle of red bricks, evoking the wall in the original site and the well into which many jumped, while trying to flee bullets.

A set of glass jars lie tilted amongst the bricks and visitors can lift the lids to smell the contents and connect with a part of the narrative.

The first jar signifies the harvest festival of Baisakhi and the day of the massacre. It is filled with the grains and smell of wheat and the sounds of a ‘dhol’ or drum can be heard from it. From there on, the visitor can experience a multitude of ‘memories’ – from a jar with toys to signify the children who died, to a jar with bullets that releases the acrid smell of gunpowder. Particularly powerful is a jar filled with red liquid. The accompanying scent has a carefully developed metallic note that delivers a ‘kick in the stomach.’

Sahu says that many visitors were moved to tears when they had finished experiencing the installation.

This installation showed how the identities and culture of everyday Indians emerge through inclusion rather than exclusion. It traces the lives of two protagonists, Supreeti and Vivek, to understand how their changing environment influenced their world-views. Each memory has a scent associated with it. Visitors lean into large megaphone-like structures mounted on a wall to listen to a snippet of either Supreeti or Vivek’s life and take in the associated scent. For instance, as Supreeti reminisces about college days, you can smell the banana chips that she shared with her roommate.

This moving installation seeks to create awareness about war-torn Kashmir through the story of a young apprentice learning the craft of perfume-making. As a song written by 16th century Kashmiri poetess, Raah Bakshatam plays, visitors sit at a table facing a large image of Dal Lake. On the table is a carved wooden box, which contains cards transcribed with verse, each with an accompanying scent.

Set in an alternative timeline of India, this exhibit portrays a future situation in which xenophobia is treated as a social evil and condition to be cured. The state identifies and ‘treats’ xenophobic individuals using a drug called Xeno 500, which is customised for each individual via a wearable device that detects body odour.

A tongue-in-cheek five minute film outlines the inherent hypocrisy of the narrative, where state power is used to further a seemingly benign cause. A pack of the Xeno 500 pills is displayed as well as the wearable that customises the treatment.

This autobiographical installation was the first one the Sahu experimented with and aims to answer the question, “Where are you from?” Visitors can pick any of the four cities that Sahu has lived in – Nagpur, Delhi, Mumbai and Hyderabad – to experience the scents that they evoke for her. These include the citrusy scent of Nagpur oranges, the potent scent of jasmine or ‘Raat ki rani’ for Delhi, the smell of ‘modak’ for Mumbai and the aroma of biryani for Hyderabad.

The installations are ambitious in their scope and impact – employing not just all senses but also a multitude of design disciplines. The team dug deep into the data on the association between olfactory senses and emotion and a total of twenty-one different scents were developed.

Sahu worked with a perfume-maker in Hyderabad to perfect the scents. She recalls carrying one thousand different bottles to the IxDA conference in Milan in 2020, to help the audience experience the installation remotely. The physical exhibit was displayed in 2018 at the State Gallery of Art, Hyderabad. It was also presented via a talk at Interaction 18 by IxDA Global. In 2020, the project won the DNA Paris Design Award for Graphics in the Interactivity category.

You can’t participate in the narrative through smell but you can read all the details on the Sniffing Out The Differences website. And the next time a smell triggers intense emotion, pause and reflect, because it is a window into your identity.