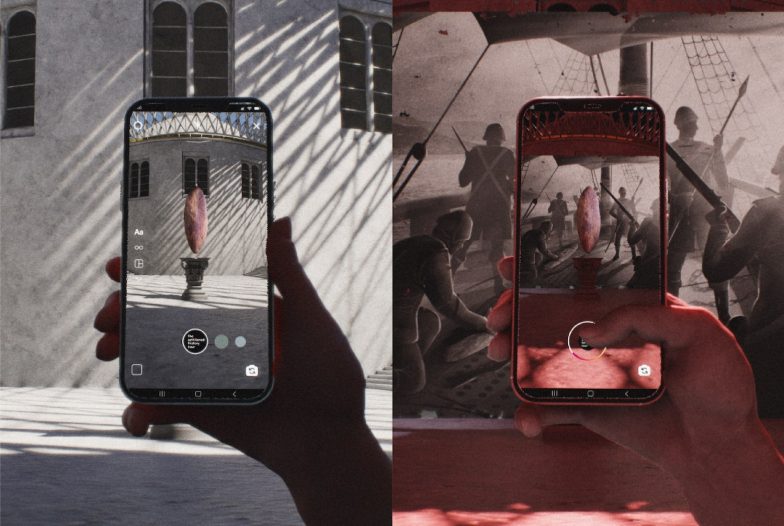 The British Museum has long been criticised for displaying artefacts looted from the Empire’s colonies, with many countries demanding that the stolen pieces be repatriated to their rightful lands.

Based on this idea, the team at Dentsu Webchutney created The Unfiltered History Tour for Vice Media.

The tour focuses on 10 disputed artefacts, including the Rosetta Stone from Egypt, the Amaravati Marbles from India, the Gweagal Shield from Australia and the Parthenon Marbles from Greece.

The tour requires that the user be physically present in the museum. Directions are included for each artefact and the tour is activated when the user scans the object with their phone. Combining an audio narrative and beautifully illustrated Instagram filters, the mobile-based tour helps users immerse themselves in the ‘unfiltered’ history of the artefacts, retold by an expert from the source country.

What did it take to actually pull this off in a pandemic year when no travel was possible?

We sat down with the team behind the tour and uncovered a very interesting case study.

Fun Fact: Nobody on the creative and production team has actually been to the British Museum

The Dentsu team pitched the idea for the unfiltered tour to Vice Media with this working prototype of the Unfiltered Tour.

A slide in the pitch deck summed up their approach. It said “Oceans 11 meets Banksy on Instagram.”

There has been significant reportage around the murky provenance of some of the museum’s collections, including a series made by Vice Media called Empires of Dirt, which seeded the idea for The Unfiltered Tour.

However, most such productions are denied shooting rights within the museum. Before the Unfiltered Tour, there was only the occasional real-life tour that highlighted this troubled history.

“The question before us,” says PG Aditya, formerly Dentsu Webchutney’s Chief Creative Officer and now Co-founder, Talented Agency, “was how could we take the tour inside the museum, without needing permission from them.”

The other big idea that determined creative direction, was the thought of ‘teleporting’ the artefacts back to their home countries.

“This led us down the path of illustrating historically accurate settings for each piece, so that the viewer could actually see where they came from,” says Binaifer Dulani, formerly Dentsu Webchutney’s Creative Director and now Founding Member, Talented Agency.

Most colonial conquests were savage and bloody, but a dominant Western gaze has resulted in an unidimensional glorification of the invaders. Cultural researcher Shaleen Wahdwana was a consultant on the project and she helped the team reference historically accurate archival material. More often than not, says Dulani, this material would be at odds with the euro-centric view that a typical Google search would uncover.

For example, Captain Cook’s landing at Botany Bay in Australia is both celebrated and commemorated. However, most documentation around it glosses over the fact that even before he touched land, “Cook shot and wounded two Gweagal warriors and stole their belongings, including the shield on display at the British Museum.”

When the first set of illustrations were submitted to Instagram, they were ironically rejected as ‘too brutal’ and the team had to tone down the battle scenes before they were approved.

“When we first started thinking about executing the idea, we started with a website, but we soon realised that if we wanted large-scale impact, we needed a social platform. The other advantage of Insta filters is that they let you impose your own point of view before sharing the content,” he says.

The Unfiltered Tour needed to work independently inside the British Museum, while being planned and executed by a team millions of miles away.

The hurdles that arose were varied and unpredictable and as Singh puts it, there were multiple SPOFs (Single Points of Failure).

The biggest challenge was replicating the changing weather conditions and lighting in the room in which an artefact was housed.

The first set of filters were developed before the lockdown in the summer. When the museum finally opened, it was raining and the lighting conditions had changed dramatically. This was finally addressed via a real-time weather api that calibrated the filters based on prevalent conditions. The user testing was done by a Vice Media team member in London, who made numerous ‘undercover’ trips to the museum to surreptitiously check the filters.

The team also had to factor in the possibility that the museum could move exhibits around. The museum was explored and exhibits tracked via Google Earth. So good had the team become at tracking the location of the artefacts, that on one occasion their information proved more accurate than that given by the Asia desk of the museum!

The teaser video, created by Rooted Films and Dentsu Webchutney played a big role in creating awareness. Distributed first on Vice’s own massive networks, it understandably went viral in countries with colonial pasts.

Vice has also added editorial heft by creating a podcast that narrates the story of each artefact for people who are not physically in the museum.

Dulani admits that for the Indian team, the project felt intensely personal, “but to do justice to it, we had to learn to move beyond a lens of anger and accusation.”

Adds Aditya, “We have the greatest respect for the British Museum, but their narrative needs to be supplemented. To paraphrase Kipling, the white man’s burden is not to civilise the world but look inwards and civilise himself.”

The Unfiltered Tour became the only entry from APAC to win a Cannes Lion in the recently concluded award show, taking home the Grand Prix, 1 Silver Lion and 2 Bronze Lions in the Radio & Audio category.

The other slew of creative awards it has won include 4 Grand Prixs at Spikes Asia, APAC’s highest awarded work at the One Show, a yellow pencil at D&AD and the Black Elephant at Kyoorius.

By May 2022, the tour had been used by approximately 15000 visitors to the British Museum so far.  “And what makes this even sweeter,” chuckles Singh, “is that those people are taking the unfiltered tour inside the museum building, using the British Museum’s wifi.”