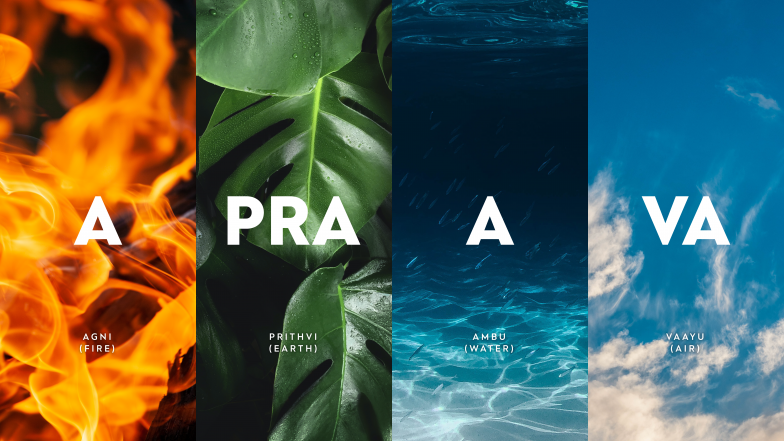 CLP India entered the Indian market in 2002 and is one of the largest investor-owned power businesses in Asia. They recently partnered with WPP-owned Landor & Fitch to re-brand the company – changing the name to Apraava Energy and adopting a dynamic, new brand identity system.

In this case study we look at:

How Dynamic Could Brand Identity Be?

CLP started their rebranding process in 2018, based on three drivers:

CLP India wanted a new brand that would reflect these changes.

Lots in a Name

Landor & Fitch developed the new brand name for CLP India by combining letters from the Sanskrit names of natural elements.

Letters from Agni (Fire), Prithvi (Earth), Ambu (Water) and Vayu (Wind) were integrated to create ‘Apraava.’ The team says that the new name is also a metaphor that represents the shift of energy generation from thermal to sustainable sources like earth, water and wind.

The Apraava logo is a custom, handcrafted logotype with four distinct geometric shapes embedded within the ‘A’ letterforms, which stand for Conventional Energy, Solar Energy, Wind Energy, and Sustainability. Thus, the logo, while reflecting the business portfolio, also tells the story of a company that started with conventional energy but is swiftly transitioning to renewable energy – from the left to the right.

The colours of the shapes have been derived from natural elements and they are used through the visual identity – both as accents and to create larger composite forms.

The most interesting aspect of the Apraava brand identity exercise is the generative design system.

An algorithm combines data from Apraava’s plants, with weather data at the same location to power a generative design tool. The tool then creates an ‘energy signature’ from the four elements on which the visual identity is founded. Each energy element is coded to move in ways inspired by the natural elements themselves. The intensity, variability and speed are all linked to the data, which means that if the wind speed increases around the wind farm in Theni, the intensity and speed of the wind graphics increases as well.

“Saying that the Apraava brand stood for Energy In Action would feel meaningless if we created a typical static design system“, says Arnab Ray, Creative Director, Landor & Fitch, India.  “Instead we imagined a living breathing design system that is powered by the energy generated at Apraava’s plants themselves – Coal, Wind or Solar.”

The moving elements interact with imagery and copy. They are also used to create pre-coded forms and infographics.

How Dynamic Could Brand Identity Be?

It is an interesting time for both brands and practitioners – as the digital world opens up possibilities way beyond the de rigeur logo animation. However, the success of identity systems based on creative algorithms will depend on how meaningful the end-result is for the brand’s larger goals and how easily they can be implemented by in-house teams.

The Landor & Fitch team says they have countered foreseeable execution challenges via a modular design grid, step-by-step guidelines and ready-to-use templates. An in-built utility to generate videos and images on-demand, ensures that Apraava has a vast library of assets to work with at any given point in time.

A shift in traditional brand identity design will depend most on client propensity to try something new and make the investments necessary to see the dynamic system to fruition. Ray admits that Apraava “was a daring client who wanted to shake things up” while Gopinath Govindan, Director-Human Resources, Apraava Energy, says “We could not be happier with our exciting new identity, one that is truly reflective of our proposition to put Energy in Action.”