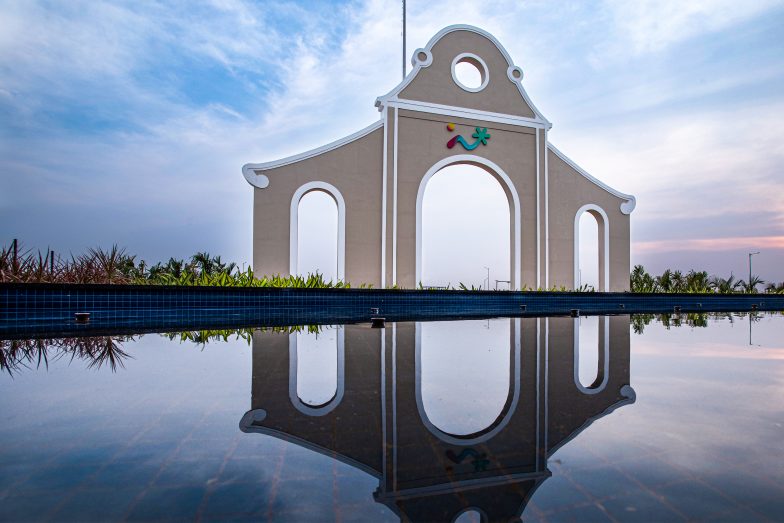 Goa conjures up images of sunny beaches, swaying coconut trees and the famous Susegad way of life. Beyond this popular imagery, however, the state is on a development mission that requires better connectivity.

A greenfield airport in Mopa, North Goa, has been developed in a public-private partnership model between the Government. of Goa, Government. of India and the GMR Group. Inaugurated by Prime Minister Modi on the 11th of December, the airport will be called Manohar International Airport, after the late Chief Minister, Manohar Lal Parriker. The airport will cater to 4.4 million passengers in Phase 1 and will have the expansion capacity to cater to 33 million passengers annually.

The brand strategy for the airport brand was developed by Vertebrand and the design by Spread. We went behind the scenes to see how they approached the project to signal a ‘new Goa.’

A Destination By Itself

They also distilled the following brand essence, which became the foundation for the brand design and experience exercise that followed:

Raghu Viswanath, co-founder, Vertebrand says that this positioning challenges the idea that a traveller’s experience of Goa starts only when you step out of the airport. Instead, he says, the experience should begin in the airport itself.

The airport is more than just a gateway to Goa and it aims to deliver all that is special about Goa, unconstrained and responsibly within its own confines. So far airports in India have been evaluated on their efficiency, this is the first time an experiential aspect is being added on.

How will this brand positioning actually be delivered in the airport?

Raghu says the strategy is to engage all senses within the airport, from carefully selected cuisine to the look and feel of the retail counters. Screens in the airport will play footage created by the Spread team to showcase quintessentially Goan experiences – from sunrises on the ocean to cashew growing.

Ambitious plans are also underway for an aero-city and once ready, this will further reinforce the idea of the airport as a destination by itself.

It is worth mentioning the larger context to the Goa airport, which involves a restructuring at infrastructure company GMR. (Vertebrand is also helping GMR Aero with their overall corporate brand strategy, including an appropriate brand architecture and unified experience across all airport-related services.) Raghu tells us that after research showed that GMR was primarily viewed as an infrastructure player, the decision was taken to hive off the airport operating company. GMR Airports Limited is now a separate company, with the brand GMR Aero. In addition to Goa, GMR Aero operates Delhi and Hyderabad airports in a private-public model. It operates two overseas airports, including Cebu in the Philippines and Crete airport in Greece.

Sonia Manchanda, co-founder Spread, says that Goa is evolving beyond the cliches. There is a growing startup culture and young people are relocating to live and work there. She points to the increasing number of Alco-bev brands from Goa and the state’s growing reputation as a culinary destination.

The design strategy therefore, used familiar cues but juxtaposed them with the ‘codes’ of the new Goa. The design strategy developed by Spread was based in the idea of ‘Feel Goa’ and the experience design aimed to bring this to life across physical and digital interfaces.

The logo for the airport conjures a hammock tied to the trunk of a palm tree swaying in the sea breeze. The hand-crafted form incorporates a bright sun shining over a red laterite mountain that evolves into blue waves and then the form of a palm tree. The overall wave-like form is also a metaphor for a new Goa.

In addition to signage, a massive 100 feet airside logo has also been created.

The design strategy, says Sonia, goes much beyond branding interfaces with the logo. The roads leading up to the airport, for example, have been included in the overall experience through a number of design interventions. These include highlighting village names and painting underbridges, water tanks and viaducts. Massive stencils have been used to create distinctive pillars or stambhas with patterns reminiscent of Azulejos tiles. These are repeated around and within the airport in metal view cutter jaalis.

Spread has created several other installations around the airport – from a life-size statue interpreting Mario Miranda’s sketch, ‘Under a Coconut Tree,’ to a ‘I Love Goa’ installation which allows for selfies.

The branding initiative also includes an ongoing collaborative called Projecto Goa, where craftspeople and self-help groups can sell directly to passengers, from a rent-free space.

Our design strategy has been to celebrate the opening of a new destination as well as a new wave of prosperity and growth for Goa, keeping all the things we know and love about the state while adding fresh elements.

Flights are scheduled to start from January 5th and we’ll report back once we’ve experienced the airport for ourselves.