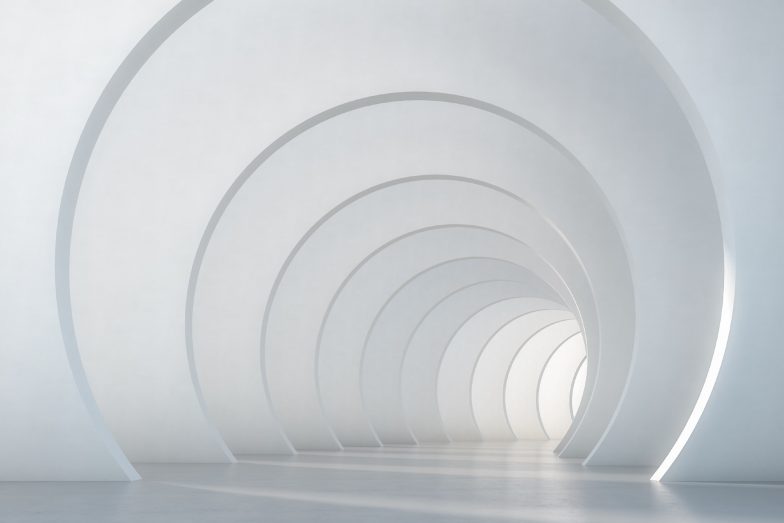 7:22 AM. I wake up. Rather, I am zapped awake by my Perimeter6. More effective than any alarm, the ‘Most Important Wearable’ awardee for five years in a row, detects my vitals and knows exactly how much sleep I need. I have been considering upgrading to the PM7 revealed at the virtual CES earlier this year – that mental health detection capability could be a game-changer. I mean, everyone’s talking about screen-life balance.

I lazily sift through my Perimeter data and compare how I did versus my friends. Ha,
my BP is better than 96% of them. I get up from bed and stick my finger in the HemoGoblin. Alas, despite all the improvement in consumer medtech, there are still some things you need blood for.

Hmm, my calcium levels are a little low. No worries, my VitaPrinter will use the data and build my custom pill by the time my coffee is ready. Blood rapid-tests are
now a morning routine around the world, thanks to that iconic 2027 campaign,
I’m Bloody Well, Thank You. Brushing teeth is no longer the first morning ritual (that by the way, was also the result of an ad campaign about a century ago). Some things change, some remain the same!

Divya is out of town on a work trip, her first in months. It’s an important deal,
otherwise her company would not use one of her three, annual Professional Flight
Permits to make that expensive Mumbai-Delhi flight. And to think just a few years ago, companies would fly around writers like me without a thought.

I walk to my MeetPod, a functional Ikea model. I have a v-meet starting soon and I get busy with avatar loading, optimal temperature setting and audio calibrating. Honestly, it’s less high-tech than it sounds. Once home became the ‘operating environment’ for practically all activities, it didn’t take much for companies to optimise a house for different activity streams – from work and meetings to friendly catch-ups and entertainment. (Side note: I wonder if I can get my company to upgrade me to the
MeetPod Lux 4531– those massage modules look rad!).

While the MeetPod sets up my optimum meeting environment, I scroll through the many Covid-19 fifteen year anniversary articles.  This one from Andy Mukherjee sums up the past decade and a half nicely.

“The massive changes we have witnessed in the last fifteen years would not have been possible without three things. One, the proliferation of Universal Basic Income, which proved to be the most important, if controversial, economic policy in centuries. Two, the massive investment in 5G technology (no denying that India spent more on the information highway than real- life ones).  Third, a seismic societal reorganisation to do as much as possible from home.”

The last has truly changed the nature of many businesses, even traditional ones like fashion. Not to boast, but my last award-winning campaign for a fashion brand said ‘You can safely disregard the bottomline’.

Ah there’s Billie Eilish’s voice telling me it’s nearly time for my meeting.  I ask her to make a note that I need to change the voice, I’m getting a bit bored with it, even if it is the voice of one the most famous music artists of the decade. The vStock library has millions of free voices of course, but you need to pay for more exclusive licenses. The one-device license for Sir David Attenborough’s voice, for example, is practically priceless.

My meeting begins. The client is an Amazon100 company that has developed a pet-health tracking collar for paranoid pet parents. With both adults and kids now working and learning from home, birth rates around the world have plummeted and pet adoption has continued to increase.  We’re suggesting a campaign titled ‘Paws and Remember’ that is a throwback to the 2020 pandemic, which sparked off a wave of pet adoption.

The day flies by, interrupted only by stretching and callisthenic breaks as recommended by my Perimeter. Billie reminds me to order an anniversary gift for Divya and suggests some options. I disregard them. I’ve actually found the perfect gift– an original, limited edition Strange Planet figurine made virtually by Nathan Pyle himself. With the demand for material goods falling and blockchain becoming ubiquitous, it is now the maker or previous owner that is the determinant of value.  Banksy’s first 3D model in Minecraft for instance, is owned by the virtual Louvre and the raw files for Christopher Nolan’s first all-virtual (shooting, editing, post-production, distribution) film were just auctioned for several thousand bitcoin.

It’s finally evening and a special one at that. My buddy Vishal and I are going to a real concert – despite the steep price. We could have chosen to stream it at home, attending it ‘together’ via our avatars, even syncing what we eat and drink, through Swiggy’s ‘Be Apart, Eat Together’ service.  All the predictions about digital gigs I read in a seminal article in The Hard Copy in 2020 have actually came true. But this is a band we love and we’ll pay the premium to see them in the flesh.

I pick up Vishal from Andheri, and we head to antiSocial – still the centre of rock and metal in Mumbai.  We’re both wearing black Ts of course, but they’re made of a new, degradable bio-fibre. We get stamped at the door and pass through a disinfectant blast. I head to the bar where the friendly ‘tender offers me a beer. The inside reactive label shows me that the tipple is still fresh – far gone are the days when one would just check for coldness!

Off we head to the front. “Remember that awkward gig when the Great Lockdown of the 2020s lifted? People were so scared to mosh”, Vishal reminds me. Now, despite the premium price, there is a reasonably high number of attendees, although nothing like the crowds in pre-Covid days. The band comes on. The lead singer reminds us it’s the 15th anniversary of their album, written during the pandemic. The first song is a tribute to that era’s heroes, and the opening riff is greeted with much raucous approval. It’s called ‘Doctor’.

Ah. Reminds me of the first time I heard it, back in September 2020. What a difference fifteen years (and a virus) can make!