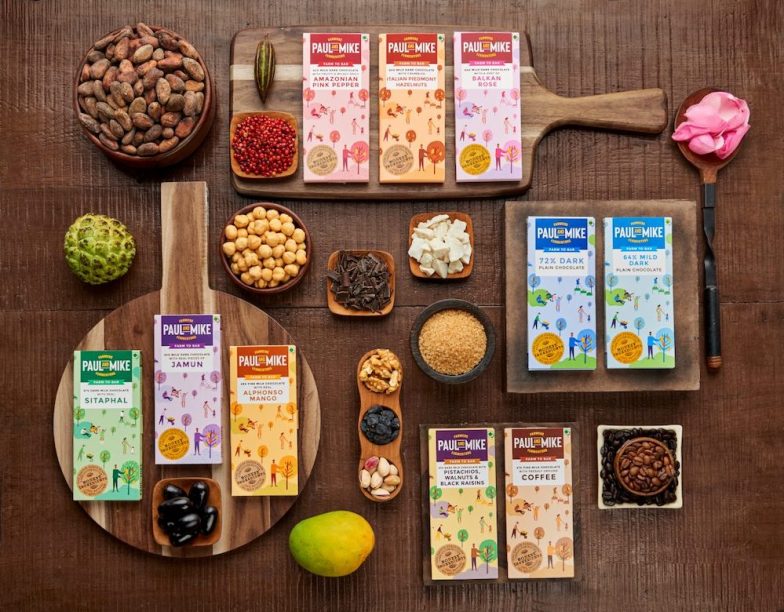 If asked to name a premium chocolate brand, most Indians would probably say Lindt or Godiva. Very few are aware of Latin America’s rich chocolate-making heritage, exemplified by storied brands like Pacari. It is this tradition, with its emphasis on progressive farming techniques, complex flavours and craft, that chocolate brand Paul & Mike hopes to recreate in the Indian market.

Not Your Average Chocolate

Paul & Mike currently offers thirty six flavours that are quite different to the variants typically associated with chocolate. From Sitaphal and Jamun, to Thandai and Peanut Chikki, the brand unabashedly embraces its Indian roots. Vikas Temani, Founder and Business Head, attributes this to a 3P branding framework that he follows:

Paul & Mike’s value proposition was clear from the start: To bring fine farm-to-bar chocolate to the market, at the price of a commercially produced European brand like Lindt. (Most bars are currently priced at Rs. 250 each). Temani likens to this the wine industry. A decade ago, wine was largely associated with France. Today, Indians are welcoming of wines from across the world, including domestically produced vintages.

It is the differentiation and personality that the team works hard on. “If we had just launched another Cranberry chocolate,” explains Temani, “It would be hard to stand out. Our exotic Indian flavours are not just true to our brand positioning, they help us get noticed and create brand recall.”

The brand’s packaging also drives home the differentiation. Developed in collaboration with Mumbai-based Studio Glyph, the packs use a pastel palette that is in sharp contrast to the dark tones typically associated with chocolate brands.

Pari Purohit, Founder, Studio Glyph resonates greatly with Temani’s vision of putting India on the world’s chocolate map. The design approach took calculated risks, breaking category codes to stand out on the shelf. Instead of widely-used product imagery, the packs showcase illustrations from the farming and fermenting processes. “There were many considerations that went into the packaging,” says Purohit. “We wanted to remind the consumer of where and how the chocolate was made. While the consumer needed to be educated about fine chocolate, we did not want to over-intellectualise it. At the end of the day, eating chocolate is a happy occasion and this must come through in the design.”

Were they apprehensive that the pastel palette and lack of product imagery would cue milder flavours? Purohit says that the brand addresses this successfully through social media and other communication channels, which stress the richness and taste of the chocolates.

Paul & Mike is backed by Synthite, a a US$ 200 million natural food ingredients company, headquartered in Kochi. This gives the brand an edge in terms of resources and allowed it to first launch offline in 2019. Temani admits that starting with premium, offline retail was expensive, but it helped to create awareness amongst influential shoppers.

The pandemic forced a move online and today Paul & Mike sells from its owned Shopify site, as well as large marketplaces like Amazon and more specialised ones like LivingFood.

In-house design, photography and marketing teams have allowed for constant experimentation in marketing and social media. The marketing campaigns that have worked best for Paul & Mike are the ones that stay true to their philosophy of ‘being different.’

June 30th was the fiftieth anniversary of the film Willy Wonka and the Chocolate Factory. The brand launched a contest asking customers to look for Golden Tickets in their chocolate packs and win freebies for a year. Conceived and implemented in less than a day, this has been their best-performing campaign to date.

“We would rather celebrate the anniversary of the Willy Wonka film or World Geek Day or World Honeybee Day and get noticed by our target audience. What is the point of doing what everyone else does and getting lost in the noise?”

While the digital medium has allowed Paul & Mike to experiment and grow, offline events have pushed them to innovate. To make their participation in Tapped, a popular craft-beer event in Mumbai, more meaningful, Paul & Mike partnered with Simba to create a chocolate with caramel and stout beer. The flavour proved so popular that it is now part of their permanent range. Other partnerships include a Sula Dindori Reserve Vegan Chocolate, a collaboration with gelato maker Sammeys and a new Lemon and Mint variant launched together with personal care brand Ras.

Perhaps the biggest fillip to the brand has come from winning the silver medal at the prestigious International Chocolate Awards 2020 in Italy. This has brought a flood of attention and publicity that has considerably raised brand awareness. Interestingly, the award winning product was a 64% Dark Sichuan Pepper and Orange Peel Vegan chocolate – a variant that Paul & Mike had developed for a trade show in China.

While Temani feels it is too early to disclose numbers, he says they have grown 300% year-on-year and after winning the International Chocolate Award, he expects to close this financial year with even stronger growth.

“Don’t get too caught up with jargon and marketing terms. Customers today are extremely savvy. If you have a great product, create design and messaging that is not like everyone else. Your best chance as a young brand is to stand apart, not to fit in.”