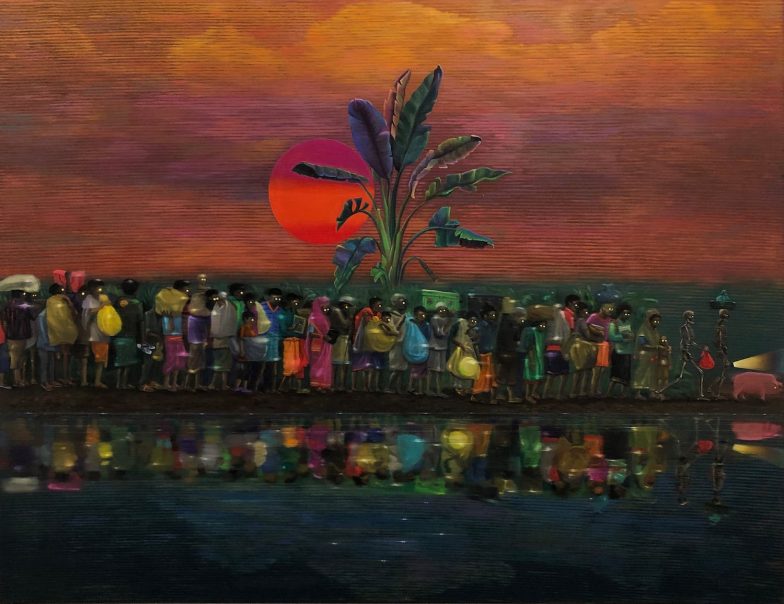 The India Art Fair is known for bringing together modern and contemporary Indian and international artists, and is one of the biggest fairs for Indian art buyers. This year was no different. The central space of the exhibition hall had the very sought after Bombay Progressive Artists, Bengal and Madras School artists, and other Indian modernists. What was of greater interest, however, were the newer crop of artists that surrounded this space. Their work ranged from documenting the mundane to making a political statement. They used various media, visual forms, styles, and some even used social media trends to make the artworks interactive.

It may be my graphic designer eye, but a great number of artworks seemed to be influenced by graphic design and infographic systems. These were employed to make a statement, adding interactivity, or for aesthetic relief. Many works used grid lines, canvases made of account book pages, collages with political maps, and so on.

Reena Saini Kallat’s Leaking Lines are a series of infographic pieces that highlight the lack of access to a water source in high conflict zones. Shilpa Gupta’s 100 Hand Drawn Maps of Country is another informative piece that displays what India’s political map looks like to a 100 Indian adults. Shailesh BR’s Eclipse is yet another series of mixed media images made from a collage of political maps.

The work of Chennai-based artists Murali Chinnasamy and Vijay Pichumani may not be politically charged, but they are a visual treat that exude detail. Chinnasamy creates depth with layers and layers of paper, and uses intricate pen and ink drawing for texture. Pichumani’s incredibly tactile work is made-up of fine engraving on a wooden surface.

Motifs used in artworks ranged from personal ones from the self-reflective, free-spirited self-portraits of Shilo Shiv Suleman, to the pop-culture references of decades seen in KK Raghava’s Impossible Bouquet. For Sameer Kulavoor, the motifs are everyday life in Mumbai – street sellers and chawls. Quite a few of the artworks confronted the issue of displacement and migration, like the line of empty-eyed people in Balaji Ponna’s Footprints on the Mind.

Technology played a significant part in this year’s fair. Suchitra Gahlot’s Fun Sun is an installation with 12 digital screens, each with a sun that was slowly setting. Unlike our Sun, this digital sun can be moved around – pointing out that humankind when left to our devices, want to manipulate nature.

A similar use of screen and technology was employed by the Korean artist, Hyungjin Park, who embedded a surreal video of a floating head with butterflies right in the middle of his lenticular artwork, Redemption. His drawings with lighting on the back for sunlight were equally mesmerising, and had throngs of people crowding around them.

My favourite use of technology was perhaps the work of the Sylhet artist, Promotesh Das Pulak – two automated hands in endless debate called Not My Fault. It remarkably sums up, through mechanical juxtaposition, the overall atmosphere around the world – right versus left, them versus us – two sides never coming to terms with each other. Even though the organisers silenced the politically-charged performances, it is hard to hide the subtle passive activism that is inherent in the art world. Hopefully, these works of art will stimulate thought and conversations, and embolden art event organisers to display controversial but meaningful work in the future.