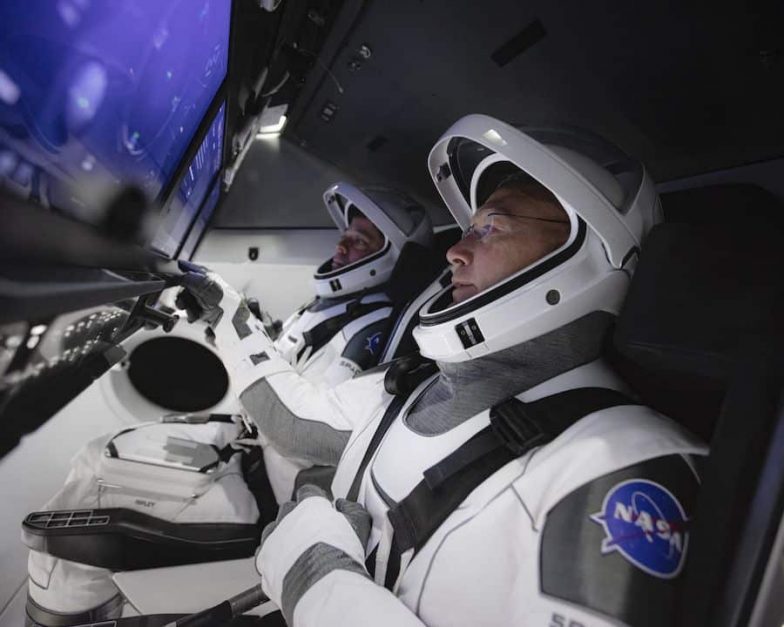 As the Falcon 9 roared to the skies like a silver javelin on Saturday May 30th, it created a new era of human space travel with many ‘firsts’.

For the very first time, SpaceX, a private company, has launched NASA astronauts, Robert Behnken and Douglas Hurley, into orbit. The Crew Dragon spacecraft carrying the astronauts launched atop a Falcon 9 Block 5 rocket and returns to Earth via an ocean splashdown.  This was the first space flight from American soil since 2011, when the US Government shut down the space-shuttle program.

On the show ‘60 Minutes’ in 2012, host Scott Pelley asked SpaceX Founder, Elon Musk, if he believed that the next American rocket to take an astronaut to space would be his. Musk’s reply, “I believe that is the most likely outcome,Yes.”

The astronauts are wearing individually custom-built spacesuits, produced at SpaceX that have been ‘cut like a tuxedo.’ This was in response to Musk’s brief to costume designer, Jose Fernandez, who has worked on films like ‘Batman v Superman,’ ‘The Fantastic Four,’ and ‘The Avengers’.  In an interview with Bleep, Fernandez quoted Musk as saying, “Anyone looks better in a tux, no matter what size or shape they are.”

The final suits are sleek, white and tapered, with dark grey accents and a touch of Stormtrooper

A NASA Press release says, “a single connection point on the suit’s thigh attaches life support systems, including air and power connections. The helmet is custom manufactured using 3D printing technology and includes integrated valves, mechanisms for visor retraction and locking, and microphones within the helmet’s structure. The suit also routes communications and cooling systems to the astronauts during flight.”

“One of the biggest features of Dragon are the touch screens on the inside. “We designed them not just to be functional but with a user experience in mind.”

However, Hurley and Behnken worked with SpaceX to get used to this new system and “refine the way that you interface with the touchscreen and the way your touch is actually registered on the display”.  In addition to having touchscreen controls, Crew Dragon is also an autonomous vehicle. You can actually try the system out for yourself with this simulator released by SpaceX.

The black and white colour scheme seen on the spacesuits continues in the minimalist and seemingly roomy control room; the interiors of the SpaceX Dragon Crew command pod are straight out of a science fiction fantasy.

Perhaps to mark the significance of the launch, NASA used its new, red ‘worm’ logo, instead of its familiar blue symbol. The red logo was designed by Danne & Blackburn in the 1970s and phased out in favour of the original 1950s ‘meatball’ design in 1992.

“The worm is back. And just in time to mark the return of human spaceflight on American rockets from American soil.”

The biggest design innovation that SpaceX has pioneered is, of course, the fact that Dragon 2 is partially reusable, potentially resulting in a significant cost reduction. The first stage of the spacecraft is capable of re-entering the atmosphere and landing vertically after separating from the second stage. SpaceX has long been committed to developing technology that will allow full and rapid reusability of space vehicles – perhaps, bringing Musk’s vision of passenger space travel closer.

Take Us With You

NASA has so far transported crew to the launch site in an Astrovan, a modified Airstream motor home. This time, however, Colonels Behnken and Hurley rode to the Kennedy Space Centre in Florida in a Tesla gull-winged Model X S.U.V.

The feelings of most people on earth were probably summed up in this image by astronaut Garrett Reisman, who held out a ‘Take me with you’ sign as Hurley and Behnken drive by on their way to launch.