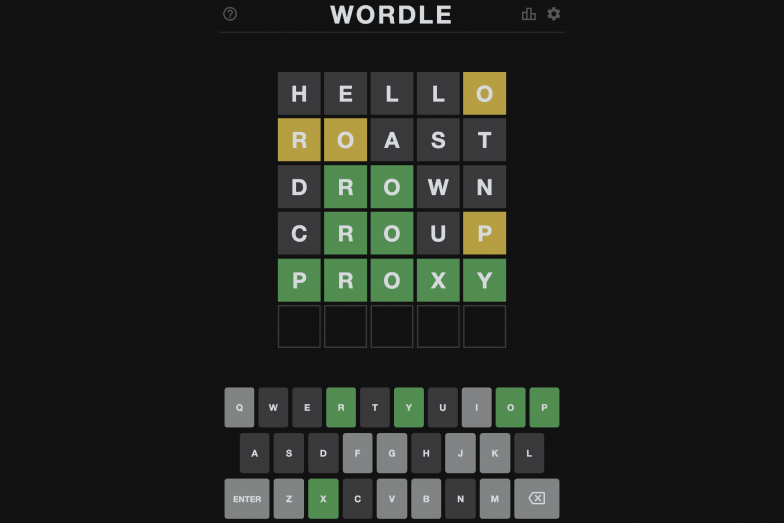 By January 1st, 2021, that number had increased to 300,000. Current estimates say that Worldle players are close to 2 million.

What makes this remarkable is that Wordle’s growth has been entirely organic.

Former Reddit engineer and the creator of the game, Josh Wardle, created it for his partner Palak Shah to pass time during the pandemic. (The name of the game is in fact a play on Wardle’s last name).

What Has Led to Wordle’s Success?

In this interview, Wardle points to a few factors he considers important:

2. Simplicity – the no-frills interface invites you to play without banners, ads or any other distractions.

3. Limited commitment – there are no notifications through the day. This is a game that asks you to spend a few minutes on it and no more.

While Wordle made its debut in June 2020, its hockey-stick growth only happened in December of the same year.

Green indicates the right letter in the right cell

Yellow indicates the right letter in the wrong cell

Black indicates a letter that is not in the word

In the screenshot from my Twitter feed above, you can immediately see that I took 5 tries to get the Wordle right.

In my first try, I placed two correct letters in the wrong boxes. (2 yellow boxes and 3 black ones)

In my second try, I placed two correct letters in the wrong boxes, one correct letter in the right box and two wrong letters (2 yellow boxes, 2 black boxes and 1 green one)

In my third and fourth tries, I got the first letter wrong (One black box and 4 green boxes)

In my fifth try, I cracked the word (5 green boxes)

Anyone who has played Wordle doesn’t need this explanation. They know how long it took me and where I got stuck – all at a glance. There is this now this community of people in the know, each of whom is working on the exact same puzzle and can see how others fared while attempting to crack it.

Philosophy professor and author of book ‘Games: Agency is Art,’ C Thi Nguyen, points to this as a great example of social graphic design that provides ‘a quick, crisp window’ into another person’s experience.

Wordle’s growth has been fuelled by social sharing based on common knowledge – only if you have played, can you be part of the group that shares this knowledge, and once you have played, you know that everyone else who has played, knows you played. You can decode each others results and evaluate your attempt for the day, in comparison to others, in a friction-free way.

Like all successful games, Wordle is birthing its own spin-offs and rituals. There is an unofficial Chinese version. Twitter and Reddit are full of Wordle hacks, players have favourite words that they start guessing with and there are even products that make for more interesting social sharing graphics.

Hubspot founder Dharmesh Shah also pulled together a tool that lets you see how good your first guess is. And in the ultimate homage to a trend, Google launched a looping video that shows Wordle attempts, if you search for the game.

Can merchandise be far behind? Wordle pillows are popping up and we fully expect to see Wordle mugs and Tshirts soon.

While Wardle himself has decided not to monetise the game, several copycats sprung up, which Apple has since removed from the App Store.

The interest in Wordle may not last, but the basic principles of social sharing will. Think about that the next time you are trying to distribute a message or build a community.

This article is being continuously updated with the many facts and tips that our readers are sharing after reading it. We thank you for helping us make it better. 🙏🏼. Pro tip from Navneet Nair: Do not start with HELLO and waste an ‘L’