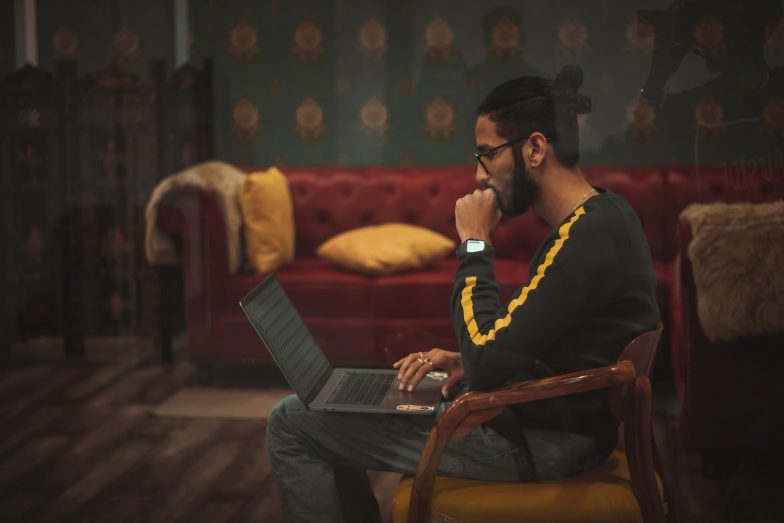 When your job depends on being physically present in remote locations and travelling with a crew and bulky equipment, the pandemic can be a game-changer in a not-so-nice way. Most photographers I spoke to have seen their regular income drop as shoots get cancelled and travel becomes fraught with risk.

Clients admit that projects are stalled. Sarang Gupta, Photo Assistant at Architectural Digest India tells us they are not commissioning any shoots currently. “For the organisation to be liable for the safety of a large crew is too much of a risk”, he says.

Stuck in the confines of their own homes with their cameras but no muses, photographers are innovating with new techniques. One concept picking up speed is remote or virtual shooting, first introduced by Conde Nast photographer Alessio Albi in March. Albi, who was quarantined at home in Italy, shot actress Alice Pagani virtually even though they were 200 kms apart, creating some fairly stunning photos.

Two Indian photographers who are offering FaceTime shoots as a professional service are Coimbatore’s Vasanth Kumar and Delhi’s Keerthana Dinesh. Says Dinesh, who is otherwise a full-time photographer for a jewellery brand, “We get together before the shoot to decide the wardrobe and figure out lighting, but most of the work with FaceTime shoots is done by the model, because all I can do is provide instructions on how to handle and angle the camera.”

Now that FaceTime shoots are catching on, photographers are pushing them further. Fashion photographer and artist Roshini Kumar, “illustrates” her FaceTime photos to make them edgier.

Delhi-based photographer Raqeeb Raza, runs an invite-only photo-story project called Isolated Bodies with body positivity influencers, body image illustrators and queer activists. “My own contribution to these shoots includes providing some pre-shoot direction and post-shoot edits, but above all else I’ve been so inspired by all the stories coming in from these individuals. Seeing them be so raw and honest has helped me get comfortable in front of the camera, which was something I initially detested,” says Raza.

Many photographers are expanding their offerings to other styles. Goa-based Amrit Vatsa, who previously ran candid wedding photography service, Shaadigrapher, says it was hard for him to move out of his comfort zone, but he is now finding better prospects in corporate photography and film-making. Others are doubling down on industries they know well to offer diversified services. Vikram Chandrasekar, one of India’s leading live music shooters, is helping musicians rejig their brand presence online, while he taps into archives to sell previously shot work.

Some photographers are using this time to teach. Independent photographer Deepti Asthana, along with two other photographers, ran a two-week long photography workshop on Zoom, which she says was very well-received.

Roshini Kumar runs an inclusivity and creative learning course which focuses on skill-building, body positivity and the feminist lens in photography. The month-long course discusses everything from developing your own photography style to breaking down the concepts of male vs. female gaze.

Bangalore’s Rakshita Mittal conducts workshops and courses for her clients. She now hosts group sessions for ₹500-₹1000 per head, starting with a module on demystifying food photography for home bakers.

Some sectors and opportunities seem to be picking up. Delhi-based photographer Tarun Chawla says he is getting interest from food, watches and jewellery brands who are moving their businesses online, as well as those with new business models, such as a company that does virtual tours of refurbished cars.

A check through a stock image sites’ trending topic resources for photographers indicates images that people are searching for, which include social distancing and changing environments.

The bigger question to ask  is whether remote shooting is just a quick-fix, or will be seen as a viable, lower-cost option post-pandemic, like increased WFH or decreased travel?

Chawla does not think this is likely. “While planning can be done remotely, the execution is tough to do from afar, and will lead to sub-optimal results.”

Some genres like architectural photography also demand physical locations. Publications like Architectural Digest are experimenting with  live space tours on their Instagram handle, but this is no substitute for the sumptuous architectural images we are used to.

Most photographers I spoke with said they would not go back to being a “one trick pony”, even when business improved. Says Vikram Chandrasekar, “You have to learn to adapt, come up with new ideas and stay top of mind with the people you want to work with.”

Another outcome could be the decoupling of skills. The fact that there is a ‘creative’ aspect and a more functional one to the craft has been brought home. Says Rakshita Mittal, “This phase made me think. What is the ratio of skill within photography which is ideation? How much of skill can be transferred or directed? I realised a lot of my time goes into ideation and even if I’m not present, someone can do the shoot for me.”

Freelance photographer, filmmaker and musician Omkar Potdar who is directing lockdown music videos for fellow musicians says isolation has given him the opportunity to take a step back and set up a plan for his work in the future. “It’s a good time to reflect on the kind of work you want to do going forward or narrow down on the few things that you do well. It’s a good time to build your skill-sets around things that can benefit you financially later.”

Mumbai-based Parizad D., who taught herself stop-motion and applied it to this music video by Parekh and Singh, sums it up: “I’ve learned that when there is a true and honest impulse to create, the semantics of it cease to matter. As an artist, heck, as a human being, we need to learn to adapt to different situations.”