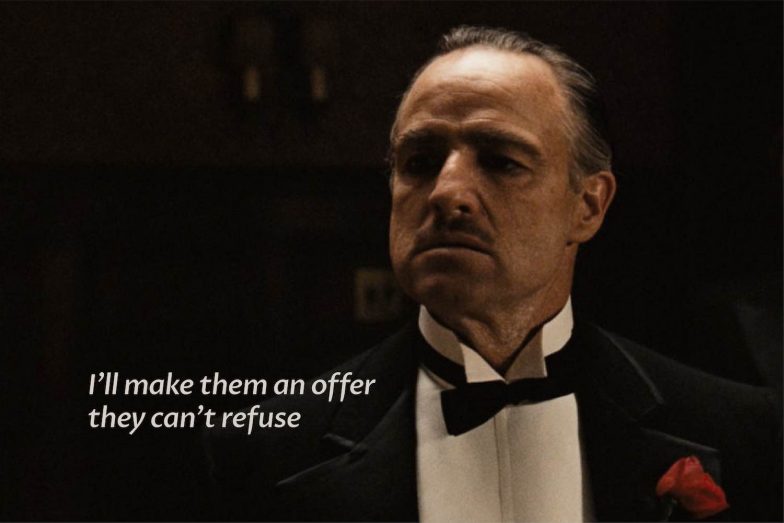 In May 2017, Scott Galloway, Professor of Marketing at NYU Stern, suggested that Amazon should buy Whole Foods, a few weeks before anyone knew that the deal was imminent. Since then, ‘the dawg’ as Galloway is called, has made several predictions around similar ‘gangster moves’ that companies should make.

Taking inspiration from the good professor, we created a list of our own ‘gangster moves’ for Indian companies. We focused, of course, on digital-first brands. Read these with a pinch of humour but also remember that each of them does make sense for a solid business reason – vertical integration, appealing to a new audience, better customer experience, or just sheer ambition signalling.

Why it Makes Sense: Cred has a premium customer base, oodles of credit-card spending data and a great interface, while HDFC could desperately do with some digital chops.

HDFC has deep coffers, but to build deep digital capabilities requires time and the right culture. Case in point is the bank’s UPI offering, Payzapp, which has never made a dent in the market. An acquisition of a digitally native product firm like Cred would give the bank’s digital capabilities a quick boost, even though the joke remains that no one knows what Cred actually does.

“Just compare the HDFC bank mobile experience with Cred and you’ll see how smooth the latter is. This is a digital DNA issue, not something you can fix with an annual budget review.”

HDFC is India’s largest credit card issuer and Cred is built on the back of credit-card repayments. The Cred business would come with a valuable database and of late, the company has been making some smart moves like an expanding portfolio of d2c brands for the redemption of its ‘Cred coins’.

If this deal takes place, it will be Kunal Shah, Founder, Cred’s second brush with a big bank. He sold Freecharge to Snapdeal in 2015 for US$ 400 million, only for Snapdeal to sell it to Axis Bank in 2017 for just US$ 60 million. Even as this story goes to press, however, Cred has announced a US$ 80 million fundraise at a valuation of US$ 860 million.  Not exactly a bargain, but still a good buy for India’s largest bank.

Why it Makes Sense: The Tatas have announced consumer tech ambitions. Pinterest will vault this initiative into another orbit.

It’s a well-known secret that the Tata Group is working on a super-app that will bring all its consumer businesses together on one platform.

However, building a successful ecommerce platform needs more than deep resources.  (The jury is still out on Tata Cliq, the group’s first marketplace foray.)

We think that the addition of Pinterest will give the Tatas that ‘x factor’ that can be the difference between success and failure in the consumer tech world.

Pinterest drives discovery through products, hobbies and ideas and its more socially conscious audience is a great fit with the Tata ethos.

We also believe that Pinterest will need to be treated sensitively by any acquirer, else its users will leave in droves. The Tatas are well-placed to do this.

Not surprisingly, Indians form the second largest audience on Pinterest, after the US. All kinds of interesting use cases could emerge: For example, brides tend to use Pinterest for wedding planning. Think of what Tanishq could do with that.

Pinterest’s users have surged during the pandemic and the stock is now trading 200% over its IPO price. The company is currently valued at more than US$ 20 billion. While lesser players may be daunted, the Tatas have shown that they have the appetite for large, global acquisitions (the group bought Jaguar Land Rover in 2008 for US$ 2.8billion).

Why it Makes Sense: Asian Paints has been trying to position itself as more than just a paints company over the last few years. Pepperfry will allow it to offer a ‘complete home solution.’

Asian Paints offers services that include interior design as well as non-paint products like designer wallpapers by Sabyasachi. The company also has a Color Academy partnership with NSDC and a for-purchase trends forecast called Colornext,

Asian Paints is big on experiential marketing, best manifested by its Signature Store in a posh Mumbai locality.  Marketing and messaging have consistently been focused on the ‘home beyond paints.’( See the Where The Heart Is series on YouTube.)

Given the Har Ghar Kuch Kehta Hai positioning of the brand, furniture seems to be a natural fit.

With chief rival UrbanLadder sold to Reliance recently, Pepperfry is one of the few furniture players with scale still left in the Indian market.  Asian Paints’ distribution network and B2B association with interior designers would give Pepperfry a fillip. However, the furniture marketplace did raise US $40 million in February 2020, led by Pidlite, who may have plans of its own regarding the company’s future.

Why it Makes Sense: BYJU’s is now the world’s most valuable Edtech company – where does it go from here? Coursera could be a good way to expand into new audiences and new markets.

BYJU’s  has made no secret of its international expansion plans. Remember the US$ 300 million, all-cash deal for White Hat Jr – what could it acquire next?

BYJU’s has moved from school coaching to engineering entrance to CAT rapidly, but it stops there. Acquiring Coursera would give BYJU’s multiple benefits:

BYJU’s raised US$ 500m in September 2020 at a valuation of US$12b while Coursera itself is valued at US$ 2.5.  The acquisition would be a big bite for BYJU’s, but the company’s incredible success story has shown it has the stomach for it.

Why it Makes Sense:The move would give Apollo Hospitals a digital shot in the arm and allows both companies to create a multi-channel preventive health offering with heft and reach.

Healthtech is set to soar in the post-pandemic era. If you want numbers: Apollo Hospitals’ reported PAT increased by a whopping 55% in FY20, while the fitness app is set to clock US$ 20m this month.

Tentative digitisation moves by hospitals like video consulting are too slow, too little for the opportunity that awaits. The only way for them to take advantage of the healthtech gravy train is through acquisition.

HealthifyMe would bring with it habit data from the app’s 1.5 million monthly active users. This could lead to anything from marketing activities like health challenges, to deeper offerings like data-driven diagnostics and predictive analytics. One can easily imagine telemedicine, insurance, habit-linked rewards, a healthy d2c marketplace and more added on to the HealthifyMe ecosystem.

An integrated health solution from Apollo and HealthifyMe covering lifestyle, nutrition, exercise, diagnostics, physician visits and postoperative care, could be a game-changer, and  lead to a ‘rundle’ (another Gallowayism meaning a recurring revenue bundle).

I, for one, would heartily take their ‘rundle’ even if it just meant less waiting time at the OPD.

Disclaimer: This was a purely speculative exercise and we have absolutely no inside information on any of the featured companies. We hope you enjoyed reading it as much as we we enjoyed smoking a cigar and putting it together.

Let us know your gangster move predictions in the comments and we’ll feature the best ones in a follow-up edition.