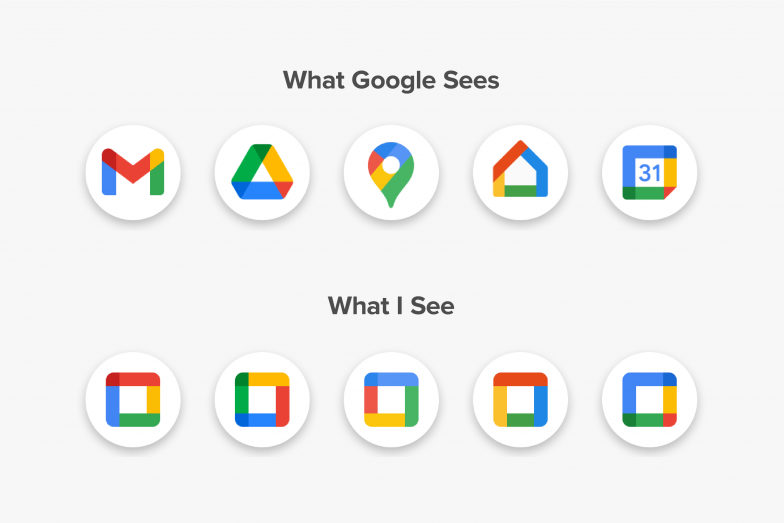 When announcing a design change, every company mentally prepares for a social media circus where the logo / icons / website will be discussed and torn apart. Then the outrage dies down and it’s back to life as usual.

The widespread criticism of the new ‘unified’ icons for Google Workplace, announced last month, was hardly surprising. It started predictably enough with colour and shape comparisons.

As people started to use the icons, however, we started hearing how it was hard to tell them apart.

In small sizes, the colour-blocking blurs so you can no longer distinguish the different shapes. Trying to pick an icon quickly from your phone screen or multiple tabs is particularly challenging.

People with any kind of visual disabilities will find it even harder to distinguish between the icons.

How Could Google Get it so Wrong?

We assume that the icons were tested extensively, so what explains their poor usability? Some critics are assuming that there wasn’t enough attention paid to use cases where the icons appear in very small sizes

“My guess is the design team spent a lot of time looking at these logos at a fairly large size, and didn’t think too hard about how they’d look in actual use on the screen a cheap Chromebook or Android phone.”

It could also be the Google teams were too focused on creating a unified brand presence with a neat solution.

Other users pointed out that the design seems completely removed from user context.

Or could Google be focusing more on acquisition versus their installed base (who can criticise but are unlikely to churn)?

“Many of Google’s new icons are like this, and they seem geared more toward being recognizable in an app store search rather than in a user’s app drawer. In an app drawer, every Google app icon will be the same four colors and will be hard to tell apart, but in an app store search, where there is one multicolored Google icon in a sea of competitor results, the Google icon will be easy to spot.”

Perhaps, all designers in big-tech companies have a cartel we don’t know about!

Whatever the reason, the criticism goes beyond aesthetics to usability issues. Given that Google has been quick to discard products that don’t work, will it pay heed to its users and change the icons? If the confusing link versus attachment icon in Gmail is any indicator, we think not.

Here’s an ironic fact: In 2016, Google released a tool to scan Android apps for accessibility issues. Perhaps it should have put that to use that on its own products. The Google Workspace Rebrand is Part of This Bigger Trend