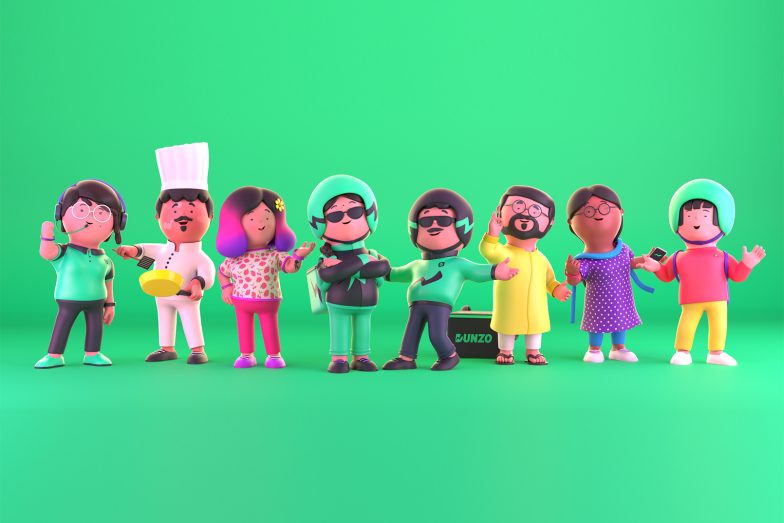 Born as a Whatsapp delivery service that quickly grew into a $775 million brand, logistics and grocery app Dunzo, enjoys almost cult-like status amongst its customers.

The company’s thoughtful and witty marketing has been foundational in creating this much-loved brand personality and we spoke to Sai Ganesh, Head of Brand, to see how they did it and what we could learn.

For example, content for Deepika/Dhruv might include Shark Tank memes, a 3D animation film on loneliness and a Mario spoof. Manjula /Manjunath will likely respond better to regional puns, songs and content featuring celebrities, the latest of which is Karishma Kapoor.

Marketing budget allocation and content vary depending on which persona is being targeted, for what purpose and on which channel.

While every branding textbook will preach this, it is very difficult to deliver a consistent brand personality, every single day, across the many touchpoints of a brand experience.

Dunzo has chosen to anchor its brand personality to its delivery partners – creating memorable 3D characters to represent them. (They have even gone to the extent of creating a set of queer, non-binary ones).

A Dunzo rider, with her/his green helmet and the ‘D’ logo with the lightning bolt are now instantly identifiable, both online and offline. The online avatars have successfully imbued the Dunzo partner – and the brand — with a personality that is warm, fun and helpful.

Fun Fact: The lightning bolt is internally called the VGHYU (named for the lightning shape on your keyboard).

“Building the mascots was deliberate, as was the decision to have multiple ones. We noticed that e-commerce platforms have always shown an image of a male rider on a scooter. One of our brand themes is inclusivity – hence the multiple mascots. We have eight mascots now, each with their own backstory and personality. Multiple mascots have also made the brand more relatable for delivery partners.”

Dunzo’s consistent personality extends not just across its advertising and marketing content, but also to its product. From the chatty in-app notifications to the post-order animation, all use on-brand tone and visual vocabulary.

#3 Know What to Measure

Normally when a startup splashes out on a full page advertisement in a national daily, they cram it full of products and offers to justify the spend.

Dunzo did something quite remarkable. They published an illustrated ‘Learn Kannada Starter Pack’ in Bengaluru newspapers. There was no hard sell of any kind, just a helping hand to help newcomers navigate an unfamiliar city.

Measuring marketing can be tricky, but Sai’s advice is to start with the business objective and then arrive at the channel and the metric. A little-known fact is that the ad was inspired by the increasing number of Dunzo users in Bengaluru who didn’t know Kannada and were having trouble with their orders.

Dunzo could have posted the same content in digital channels at lower costs, but the idea was to create something people could pin on their refrigerators – and of course, be a daily, physical reminder of the brand.

The success metric for the ad went beyond order volume and app installs and included social media mentions. The ad became Dunzo’s most shared/mentioned piece of content in 2021. It also led to a 20-30% increase in downloads week-on-week as compared to other print ads.

“We like taking risks and trying all kinds of things and we assume that 30% of our efforts will fail,” says Sai. “Especially with moment marketing (something Dunzo does very well), you can’t have layers of approval, else you’ll be riding the wave on its way down rather than up.”

An example of a marketing damp squib was an ‘The Office’ style documentary on the millennial condition. The perfect example, Sai admits, of content being too clever for its own good.

As for other details like having detailed post-checkout animations or personalised replies on social media rather than cookie-cutter templates, there are no ways to measure these things effectively and “when something is obviously good for the customer, you just go ahead and do it.”

Dunzo’s social media following may not be outsized, but its distinctive social voice has led to interesting brand partnerships. For instance, the second season of Amazon Prime’s family man saw Manoj Tiwari’s character being interviewed for a job by Kabir Biswas, Founder, Dunzo.

Dunzo applies a simple filter for the marketing content they create: “Does this have the potential to be shared?”

“People will share content only when it says something about them,” says Sai. “We always ask: How will sharing our content help someone’s social or professional standing? Not everything we create will get shared, of course, but having that filter helps.”

Outlier cases, for instance, make for great shareable content. From sending a cake with a wedding proposal, to having urine samples delivered to the lab, Dunzo has been used for all kinds of things. There was even the rumour that frustrated with the cab situation in Bengaluru, someone actually ‘Dunzod’ themselves from one location to another.

This is the kind of stuff that gets talked about and creates organic buzz.

“These situations might be small in number, but they’re big for imagery,” says Sai “They are particularly important if you have a low marketing budget.”

The other thing that brands get wrong is trying to always play it safe and appeal to everyone. Consumers are getting really good at realising when a brand is being authentic and when the message is scripted. Boring, generic communication is buried instantly.

“You need to take a stance with content. It is better to appeal greatly to a smaller group of people, who will appreciate and share your content, versus a larger group of people who may not care as much. This is also the way algorithms work today.”

Inspired by Spotify, Dunzo often uses data in their marketing communication. On New Year’s Day, for instance, their social media posts were about products ordered in different cities, including vibrating rings and condoms.

Dunzo is also known for its personalised social media replies, often punning on each user’s name. Isn’t that a lot of trouble for the team?

“Social media users want validation – we are always seeing who has liked my post or shared my tweet. So if Dunzo makes a pun on your name or shares your tweet, sure it might take a lot of effort from us, but it has an outsized impact on imagery.”

While this may seem obvious, it is impossible to create great marketing if one of the three is missing.

Creativity comes from understanding the customer and having people who understand the mediums. Hiring the right people is key and each team member is allowed to spend 20%-30% of their time on projects of their choice.

Says Sai, “Behind every brand that does content well, you’ll find people who just get the medium. There are times when even I don’t understand what my team is posting but the audience gets it. As an organisation, it is critical to create an environment where young, creative folk want to come and work.”

Dunzo has a set of processes in place that allow teams to plan ahead and work backwards. Most important amongst these are:

The only way good marketing or design can happen is if leaders understand its importance, and Dunzo’s culture – from the top-down – emphasises the importance of brand-building and communication.

Sai points to an example of a print ad where there was feedback that the ‘logo should be bigger.’ My point of view, he says, was that the smaller the logo, the more shares we will get. When I explained it to the leadership, they understood and we ran the ad again, without changing a thing.”

What’s your favourite part of Dunzo’s brand-building strategy? Tell us in the comments