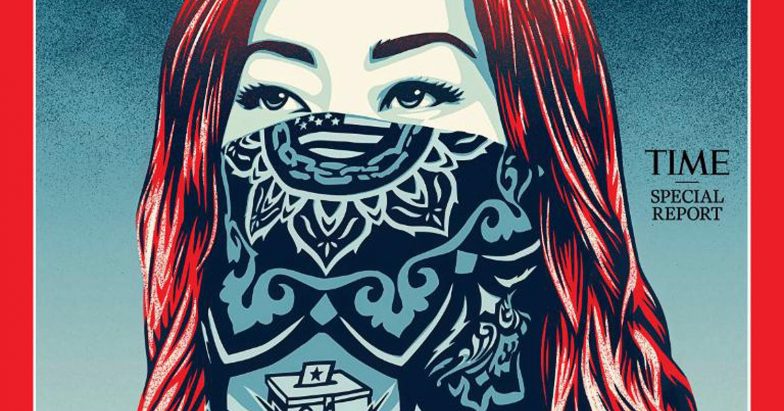 Time magazine’s latest cover is being widely shared on social media. Created by artist Shepard Fairey in his distinct style, the cover shows the face of a woman, with a bandanna tied around her face. Look closer to spot the multi-layered messages that the artist is trying to convey.

“The normally clear-cut rebel symbol of a bandana covering a face takes on a different meaning during Covid, becoming an emblem of safety, respect for one’s fellow citizens, and a sign that the wearer believes in science.”

The bandana itself shows a piece of art created by Fairey called “Our Hands – Our Future,” where a speaker in the form of a ballot box sits atop a pair of reaching hands.  This, says the artist, is to demonstrate that the subject knows the power of voting, despite the risks imposed by the pandemic and is determined to cast her ballot.

This is Fairey’s third cover for Time. Interestingly both the model and photographer are employees at Fairey’s company Obey Giant: The model is Marin Takeshita, Social Media Manager and she has been photographed by Victoria Yarnish, Supervising Director.  Readers familiar with Fairey’s work will recall the lawsuit slapped on him by Associated Press (AP) for the iconic Barack Obama ‘Hope’ poster in 2009. AP claimed that the image was based on a photograph to which they had copyright. The suit was finally settled out of court.

For the first time in its history, Time magazine has replaced its logo with the word ‘Vote,’ crafted in the same serif style as its logo.

“We stand at a rare moment, one that will separate history into before and after for generations. To mark this historic moment, arguably as consequential a decision as any of us has ever made at the ballot box, we have for the first time in our nearly 100-year history replaced our logo on the cover of our U.S. edition.”

This is not the first time that Time magazine has ‘intervened’ with its logo.  A recent cover showed an image of an introspective Nancy Pelosi that nearly covered up the masthead.

It is remarkable how, even without the Time logo, the brand is instantly recognisable.  That is because the visual equity of the publication’s brand lies in two elements: The red border, which was added to the cover in 1927 and the spaced, serif logo, which has undergone several iterations.

There are very few brands that can claim such a strong identity and it is to Time’s credit that even with a series of redesigns, the last one in 2015, it has managed to retain its core equity. It does this without ever making its covers seem formulaic. Of course, not all of us can have a 100 year legacy, but it is worthwhile asking: What makes your brand recognisable?