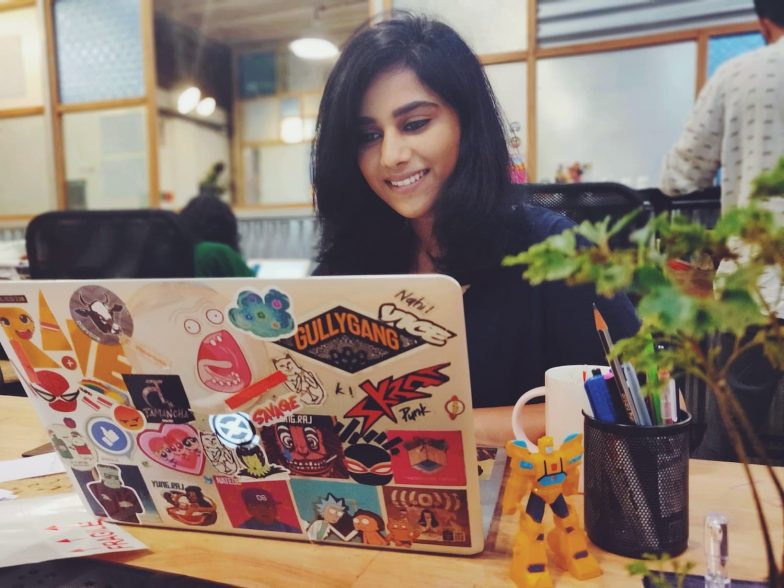 Currently the company’s lead designer, Reva has come a long way since “randomly sending OML a mail when I desperately needed a job after landing up in Mumbai in 2015.”

THC caught up with Sarma on her work, inspirations and experiences.

What is your role at OML and how did you get it?

My role is ideation, consulting with the artists, planning their vision for the year, coming up with names of the shows, what mood it should be in, managing photoshoots, designing the collateral. This is for both their online and offline persona. For a long time, I used to work on sixty artists.

I was always good at drawing, especially portraits. But it was only when I came to Mumbai, that I realised I could do this as a career. My cousin had a stall at Comic Con and wanted someone to make random merchandise, which I did. I got my gig as a designer at OML soon after that.

What are some of the major projects you’ve worked on at OML?

You have also worked with some of the biggest names in the comedy business.

Yes, I’ve been lucky enough to work with people like Kanan Gill, Biswa Kalyan Rath and Abish Mathew. I’ve followed their work for so long. Now we’ve had so many meetings and done so much work together, that one realise they’re human too and need you to help them so they can get on with what they do best.

How does it feel when your work reaches so many people?

I made a tour artwork for Soulection. A bunch of people shared it and I saw it printed on the day of the gig at antiSOCIAL in Mumbai. That made me feel super cool!

Tell us about your most recent piece of work, Rohan Joshi’s Wake n Bake.

The brief was “This is the name, I want me and my cats in it”. The initial idea was to place Rohan in an isometric room but I didn’t want to do a full body. After various iterations, I came up with the idea of it being an issue in a ‘High Times’ type magazine. Rohan in the middle, a halo effect, small elements to make it look like a comic book.

Kanan came to me and said, “The show is called Teetar, and I have no photos”. I tried to base it on Alfred Hitchcock’s Birds. It was a simple design, but it got applied in many far-reaching ways. For a 4 PM show, the LED would show a dusky vibe. For a night show, it would show the teetars (partridges) flying around in the night sky.

I make fan art (when I obsess over new music) to use as my phone wallpaper and honestly those are my favourites! But if I had to pick one piece of work, it would be a comic I made in 2015 about Naveen Deshpande discovering Chennai electronic musician, Sapta.

What role does design really play in comedy?

Indian comedians are growing on a global scale and marketing is built on good design!  Design is everywhere – from the pitch PPT, to the stage, to the ticket stub. Good design has often meant the difference between a good sized audience and a full house.

The challenge with comedy is to portray the personality of the comedian in 1000 x 1000 pixels without a mic in someone’s hand. It must be different every time and the artists must look and feel distinctly different . The design also needs to be a good mix of aesthetically pleasing and easily adaptable-to-print. You can’t limit yourself to one style. But I do have two rules – keep it clean and exercise caution while using fonts.

One of India’s most popular comedians was walking outside the OML office one day looking frustrated. I was then a junior designer. He came to me and asked, “How do you do it?”. I wasn’t quite sure what he meant, till he continued, “Be creative everyday. They expect so much of me everyday”. That’s when I realised that even the country’s biggest ‘creators’ have their moments of doubt. It was humbling.

Name three designers you look up to in India

Complete: “The Louvre Presents: _____ An Exhibition by Reva Sarma”

The Louvre Presents Deadline: An Exhibition by Reva Sarma

Check out Reva Sarma’s work on her Behance and Instagram.