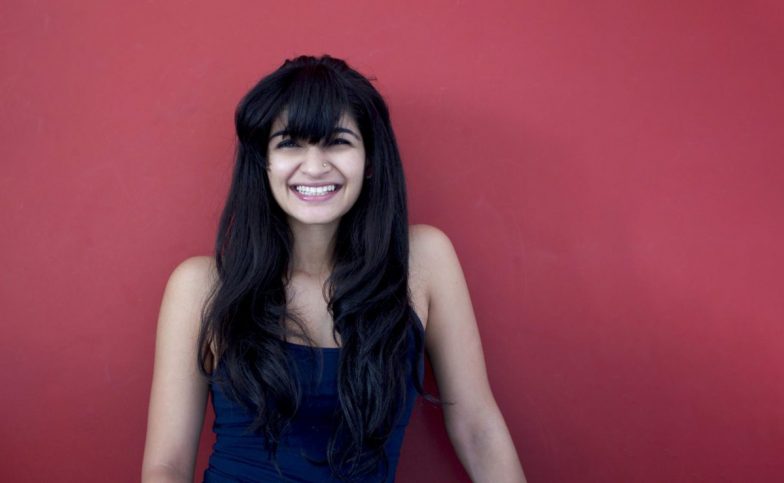 Alicia Souza lives a most ordinary life. She begins work at dawn, when she goes to her desk each day, and draws of incidents that make the everyday. From over her house in Bengaluru, planes fly by and that makes her pause in her work and her day.

In those drawings, there’s often a girl named Alicia, with her hair bunched up in a messy ponytail or a loose bun. ‘Alie’ sometimes grumbles about why nail polish never really dries, not even the quick dry one. Other times, she’s seen cackling at her passport which now reads, ‘Married’ while her perplexed husband George, with a scruffy-soft beard and a handlebar mustache says, ‘You know, it’s been years now!’

Few times a day, Souza rises from her desk to go walk happy dog Charlie and play with the furry guinea pig Henry Oats, both pets who feature prominently in her drawings on her Instagram handle. In one drawing, she’s seen rushing off with all of them squeezed in her arms, her ‘possessions’ snickering that they’re all hers. George is seen groaning at the side, ‘This is so embarrassing’.

Souza draws about everything around her. She draws of the moment of bliss when you step into your home after a long holiday, of the ever-present crippling anxiety of ‘are we doing enough’ and of life’s simple pleasures: the incoming pitter patter of puppy feet, the warmth of freshly-ironed clothes, a good poo, and a nice lingering perfume in an elevator.

Perhaps the comics are about nothing special, but Souza’s sharp observations, almost an ethnographical study of the big and small things that make humans (and animals) happy combined with her cartoon-like style of drawing delivers an instant like, making them special by creating memorable art from mundane life.

“There’s nothing unusual about what I do on a daily basis,” Souza confesses. “I just draw about everyday life. And everyone has everyday lives, right?” Gaining immense momentum in Bengaluru, 32-year-old Souza has managed to strike a chord with thousands (last we checked, 234K on Instagram) of urban India’s young and restless. Apart from her personal comics, Souza creates illustrations for big brands such as Google, Yahoo, Infosys, SAP, Times of India, TVS, The Hindu, among others. She also runs a thriving business where sells a range of merchandise all with her signature designs, “just happy stuff for happy people.”

Souza never knows what to tell people when they ask her where she’s from. She was born in Abu Dhabi to Goan parents and moved to Melbourne to study and later India to work. She wasn’t particularly an artist-kid. “I drew as much as any other kid. Once I scribbled a scooter on a wooden partition in our house and I was really proud of it and it probably looked like shit. But I never thought I’d do this for my career.” But something about drawing stayed. She moved to Australia and stayed there for five years, where she graduated from the RMIT University in communication design, but did not like it very much. “I mean, I loved the field, but I did not want to do it. But I did learn that I loved was illustration.”

“A stationary brand and kids’ products — those were two things I absolutely adored and still do,” Souza says. In 2009, She took a leap of faith and moved to India, to her roots and co-created Chumbak, one of the most successful illustrator brands in the country. In many ways, Chumbak was a designer brand that broke the mold to create uniquely desi merch for the young Indian audience. But in 2011, Souza split with the co-founders of the brand Vivek Prabhakar and Shubhra Chadda. Souza doesn’t like to talk about that period in her life.

“It’s a bit touchy. I did not move countries to leave the company I started, it was really scary. Also, I had never lived in India before, it was a new country.. I didn’t know anyone…” Souza trails off before adding. “Chumbak was great, and I never regret it. Honestly, it was the worst thing that happened and the best thing that happened, because I would have perhaps been working in a bank somewhere if I didn’t move here for Chumbak. Before that, I never knew how to run a business or knew anyone who had one. So, it was good in a way, and that’s about it.”

Souza launched her own brand, beginning from scratch. “I started off at the deep end and I didn’t have a plan B. I had bills, monetary responsibility and I didn’t have anything to fall back on. That makes it real,” she says.  The life of a freelancer was hard. Being an artist and running your own show meant overcoming personal battles as well. For instance, being shy but learning how to talk to people, or getting your work rejected all the time but not taking it personally. And also learning that even if it is freelance, it needs your undivided attention.

“You have to treat it like a job, it’s not a hobby, no faffing around,” she explains. Souza herself wakes up at 5.15 am and gets to her desk when the day breaks, starting with the things that she likes the least and easing into her day. While the first few months are difficult for any freelancer, you have to let one work carry you to the next. “I think a year and a half after I’d been freelancing back to back, I think I remember just one day realizing that for many months I’ve not had a break in projects coming in. And I think that was like a big highlight. It’s been about seven odd years now and it’s still kind of daunting sometimes, because you never know it can stop anytime, you just don’t know,” she says.

Souza considers her personal victories as professional triumphs as well. “The first time someone made me speak at an event, I thought it was so funny! I didn’t even consider it. But when I did, I think that was like a highlight of my professional life,” Souza has spoken at several events since including a Google event in Hyderabad, a few TEDx talks, at Ink Women among others. “I think it’s legit, when you speak about your work, it becomes more than just paper. I don’t think you need it to be more than paper, as an illustrator, but at the same time, you do.”

If she’s working for a client, her process is pretty simple. “But if it’s something I have to draw for social media, my process is different. I usually make notes of things I want to draw or those that I find funny or something,” she says. These are not necessarily sketches, just thoughts brought down to paper in the form of notes or phrases. “When I have time to draw, I get to my desk and start drawing. It’s not as magical. I mean I guess in a way it is, but what I want to tell illustrators starting off, is that it’s a process. You don’t sit at a desk and magically images come to your head. That comes sometimes, and it depends, but most of the times it’s very realistic.”

Alicia Souza merchandise includes notebooks, fridge magnets, phone covers, and home decor all with Souza’s signature style of quirky cuteness. One of Souza’s most popular products is her yearly planner, packed with interactive illustrations customizable designs, a must-have for any true stationary nerd. (The pre-orders for the 2020 calendar have just begun.) She’s a big planner herself, she admits. In the coming year, she’s planned to do fewer big projects and not many small ones, some that she’s rolling out new this year, but can’t discuss yet. Her calendar is packed, and she says it’s also thanks to how big design and innovation is getting in India.

“When I used to travel and get my passport checked, I’d often get asked what it is that I do. Whenever I’d say illustrator, they won’t get it. So I’d say designer, and then they’d think I was a fashion designer despite how shit-ly I was dressed. I think it’s because that was the only popular form of design.” A sign of changing ways today, is that there’s more work for everyone. “Now you can’t get away with a logo designed for a restaurant on word, you get a designer and that’s making everything a bit better-designed.”

Like Souza describes, she doesn’t create magic at her desk. With her slice of life comics, clean and simple designs, and short accounts of happy and hopeful moments, Souza is in fact creating something even better: a bit better-designed way of looking at the every day.