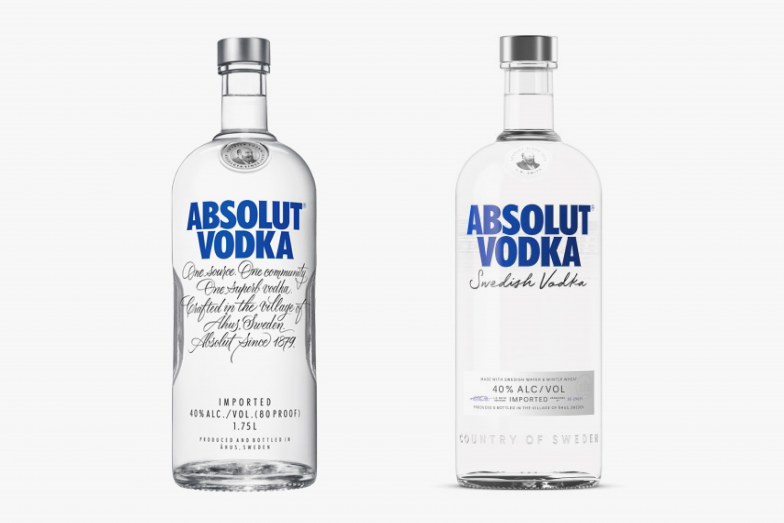 In 1979, Absolut Vodka launched in the United States in a bottle inspired by a 17th century apothecary medicine bottle. Gunnar Broman, co-founder of advertising firm, Carlsson & Broman, spotted the original in an antique shop in Stockholm’s Old Town.

The clear bottle was designed as an old-fashioned ad. The product name was the headline, followed by a label with text about the history, printed directly on the bottle.

Last week, Absolut launched a new bottle design, which is cleaner and strongly emphasises its Swedish provenance. The block of text printed on the bottle is gone. The elements that stand-out on the front of bottle are the messages ‘Swedish Vodka,’ and ‘Country of Sweden.’ The image of the founder, Lars Olssen, has moved from the seal to the front of pack.

Industry experts agree that while the flavoured vodka trend continues, a focus on natural ingredients and authenticity are the biggest factors shaping the vodka category right now. Much as with other spirits, smaller scale producers have been putting the raw materials – and where they’re grown – at the core of their promotions and this is prompting incumbent market leaders like Absolut to relook at their design.

The EU’s new Spirit Drink Regulations came into force in 2018 and these not only insist on clarity in terms of production and labelling but also encourage Geographical Indicators (GIs).

Finally, Absolut has always stood for transparency. Calling itself ‘the brand with nothing to hide,’ it even released a video where 28 of its employees featured stark naked to emphasise this value proposition! Perhaps it was time to reflect this message in a more transparent bottle?

This story would be incomplete without a quick look at Absolut’s design history with India.

When it launched in India in 2015, Absolut held a competition for an Indian limited edition bottle design. The contest was won by designer Shaheen Baig from Mumbai, whose design is featured below.

It was only later that Absolut implemented its playbook of celebrity and artist collaborations in India, working with artists Subodh Gupta and Bharti Kher, as well as author Vikram Seth and fashion designer Manish Arora. Feels like a fairly small list!

What do you think of the new bottle design?

Which Indian artists or designers would you like to see design an Absolut bottle?

Tell us in the comments below