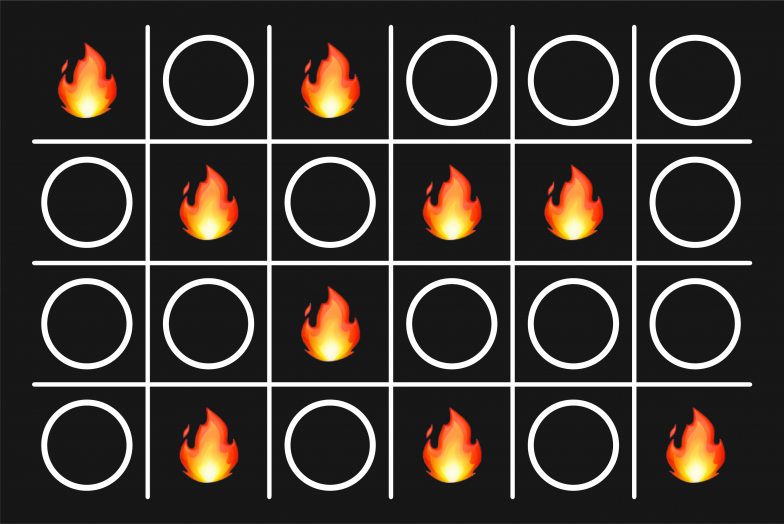 Here’s our list in no particular order. Did we leave anyone out, who should be on the list? Tell us in the comments.

As masks became a way of life, Apple obligingly changed its masked emoji to a happier one.

One of the hardest things to do for a brand that communicates across multiple interfaces and channels is to create a visual language that is memorable, on- brand and scalable. We think Dunzo did a great job of this with their signature green colour and animated mascots.

From their warm and fuzzy lockdown film, which was entirely crafted in-house, to comics and games, the identity works seamlessly online. More importantly, it works just as well offline and the Dunzo delivery person is instantly recognizable. What we particularly like is how the brand has implemented their visual system intelligently, staying on-brand but allowing for experimentation.

When Swiggy launched their online grocery store, Instamart, they went back to first principles to create moments of delight for the customer. Instamart’s UX journey is based on the way a customer moves through a physical store – first enabling intent, then tempting indulgence and then driving inspiration.

Months after the launch, the offering and the interface just gets better, as the team adds more features like a ‘Health Hub.’

The only place you can read the entire inside story is right here.

Shashank Mehta, founder of The Whole Truth, set out to create ‘a 100% clean snack brand’, one that declared ALL its ingredients upfront. A former manager at Hindustan Lever Ltd, he knew he would need a David vs Goliath mindset to take on the big incumbents.

This is best reflected in the launch non-ad starring the founder himself that tells us why “our food is screwed.”

A detailed case study on The Whole Truth’s journey so far coming soon. Sign up and get on our mailing list pronto to get an alert when we publish.

You probably got this on one of your Whatsapp groups. Mattress and home solutions company Wakefit has been known for its interesting communication, created in partnership with consulting firm Spring Marketing Capital.

This quirky film reached more than 13 million people, maybe because it summed up the general sentiment so aptly. For non-Hindi speakers, this is a “Quawali-type” rendition, telling 2020 to go to hell.

We loved that Wakefit has the courage to create content that is on-brand but doesn’t push sales. To learn more about this digital-first brand’s journey, read this case study.

The pandemic saw India’s creative community step up and respond to the pandemic in myriad ways. Graphic designers created posters, brochures and graphics to spread awareness.

There was a rise of collaborative platforms that bridged the gap between creators and those who needed their services. Collectives tracked and published Covid data and we saw low cost innovations like cardboard beds and face shields come to the fore.

This story captured some of these efforts.

We can’t stop watching these uber-cool idents created for TV channel Nickelodeon by Vaibhav Studios. From an Egg-tastic Opera to this Vada-Pav Samosa rap, these videos will have you tapping your foot and smiling.

So many big – and dull – brands could learn from them.

Two digital media sites stood out for well-designed reading experiences: The Ken, a business and tech publication, which was redesigned by design studio Opposite

These well-crafted and thoughtful interfaces showed that good looking layouts are no longer the preserve of print publications.

You would be hard-pressed to find an automobile major that did not undertake a rebranding exercise in 2020. What caused this logo change rush? We imagine it was the desire to communicate an “off with the old” and on with the new “hybrid, connected automobile” paradigm.

While the fear about AI replacing creators is an old one, this year we saw the launch of two neural networks from Open.ai that hit very close to the mark

The second system, DALL-E generates images from text prompts. You type in a text prompt and DALL-E will respond by generating multiple image options.

Read this story for more details

It wasn’t just the digital brands that stepped up their games in 2020. We also saw a host of surprising innovations from large, established players.

We have the full story here.

Which food company would show their star product decaying and mouldy? In a bold campaign called Mouldy Burger, Burger King showed grisly images of rotting Whoppers. The idea was to demonstrate that the product did not have preservatives.

The company recently revealed a change of brand identity and we love the very clever monogram designed by Stephen Kelleher Studio.

Gaming platforms like Fortnite and Animal Crossing emerged as a new destination for brands to engage with their customers. From Getty Museum giving free art to, Marc Jabocs releasing their 2020 line, Biden/Harris selling virtual lawn signs to KFC setting up a virtual stall, brands found multiple and interesting ways to be part of the game.

Indian brands, however, are yet to experiment with this.

Ads That Caused An Uproar

No creative wrap of 2020 would be complete without mentioning the two campaigns that caused an uproar and were withdrawn.

First, the well-meaning Tanishq advertisement that showed an inter-faith couple and resulted in the company’s employees receiving death threats.

The White Hat Jr campaign that made tall and misleading claims about young children becoming coders and being employed by Google at astronomical salaries.

Did we leave anyone out, who should be on the list? Tell us in the comments