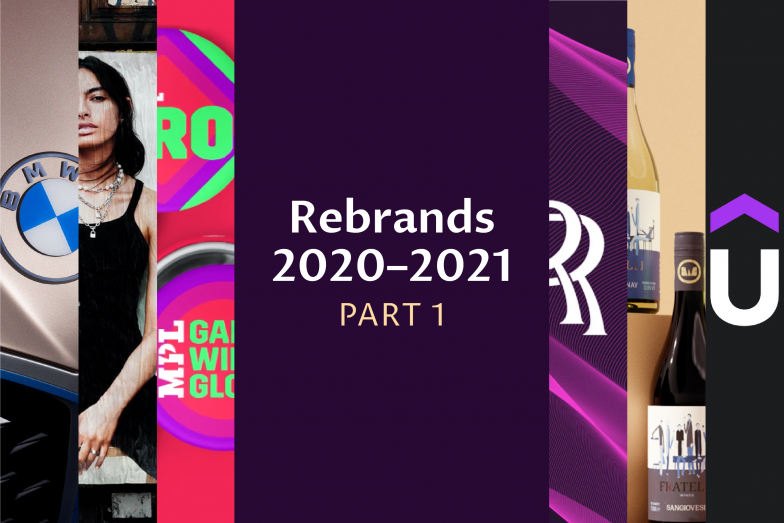 The most visible part of a rebrand is often a logo, slogan or packaging change – although that is just one part of a bigger strategic shift.

Changing brand identity is painful and only gets harder with scale. Brands change visual or communication codes to signal that something fundamental has changed.

While each case in the list below is different, a common thread that ran through all the rebrands of 2020-2021 was the need to adapt to a more digital world.

Possibly the toughest two years ever for the travel sector saw some rebrands that we really couldn’t get our heads around.

Air Asia announced not just a new logo, but a pivot in its business to go beyond airlines and become a super-app. Here’s the story.

The result of a complex, state-led restructuring saw Alitalia, Italy’s national carrier, rebrand to ITA Airways. We think they could have at least taken the trouble to redirect alitalia.com which shows a 404 page.

Low-cost carrier GoAir announced a rebrand to GoFirst in May 2021. The purpose of rebranding the 15-year-old airline was “to fully embrace the ultra-low-cost airline model” and “appeal to a younger audience.” However, other than the name and logo change, we haven’t seen any significant change in the brand experience so far.

Every major auto company rebranded in 2020-21. We saw a return to flat, minimalist logos and away from 3D graphics, perhaps because simplified, two-dimensional logos are easier to reproduce in scaled-down versions on digital interfaces. Goodbye skeuomorphism!

There were also two larger trends at play that are poised to change the very fundamentals of the Auto sector: First the emphasis on higher automation, smarter features and digital controls. Second, the shift to electric and cleaner sources of energy.

No auto brand wanted to be left behind and look as if they were not in tune with the times.

Jens Thiemer, senior vice president customer and brand, BMW, said in a press release that “BMW is becoming a relationship brand” and the transparent logo was designed to “radiate more openness and clarity.” We don’t know about that, but we do like the new clear design.

Kia launched this uber-stylised, somewhat-hard-to-read logo with a fireworks display by 300+ drones. The company said that the logo is designed to appear handwritten. “The rhythmical, unbroken line of the logo conveys Kia’s commitment to bringing moments of inspiration, while its symmetry demonstrates confidence.” Kia also announced its new brand slogan, “Movement that inspires” – replacing its former slogan “Power to surprise.”

Nissan’s new look stuck to the flat design playbook, with the bevelled ring replaced by a thin, monochromatic version and a slimmed-down ‘Nissan’ font.

The new logo is the ninth to use the diamond shape that Renault first adopted in 1925. In place of the 3D form, the brand has now adapted a cleaner, graphic shape.

This brand refresh done by Pentagram, overhauled the iconic Spirit of Ecstasy emblem to become the primary logo for the company, but retained the well-known double-R monogram as a nod to its history. This was also a strategic move to separate the car brand, from the parent engineering company.

Volvo has done a bit of to-and-fro – first scrapping its famous circle/arrow combination for a simple text-based logo in 2020, then bringing back the circle and arrow in a simplified, flat version in 2021.

The world’s oldest surviving automotive brand said it was “reaffirming its personality and character,” by creating a more powerful lion emblem within a shield. The change, says the brand, is meant to signal that “Peugeot is ready to enter a new era.”

General Motors made its first logo change in more than half a century as part of its pivot towards electric vehicles. The rounded, bright blue gradient border is meant to evoke “the clear skies of a zero-emissions future,” while the lower-case logotype is a common-enough move amongst brands seeking to project a younger image. Critics said that new logo looked like an app icon, but perhaps that’s what GM was going for?

The iconic vodka brand kept its logo intact, but shook up its bottle design, which was originally inspired by a typical ad layout. This was the first packaging change for Absolut since 1979 and we wrote more about it here.

LVMH-owned Chandon changed its logo and pack to increase brand recognition and create a more premium offering that stands out on the shelf.

After the death of its co-founder Kapil Sekri in 2020, Fratelli announced a rebrand that paid homage to the idea of brotherhood. The new labels show a group of seven brothers bonding over a glass of wine.

Data measurement firm Nielsen has been through a rough time, admitting that it undercounted out-of-home TV audiences in the US for years. After selling off a part of its business to private equity firm Advent, Nielsen revealed a new brand identity, calling it the face of a new ‘Nielsen.’

Edtech platform Udemy announced a new brand identity, based on the idea that ‘knowledge is uplifting.’ The upward pointing arrow, called the Uptick, comes with a more diverse colour palette and we’re guessing this gives Udemy a richer toolbox to draw on. The change was also accompanied by a major UI overhaul.

CLP India entered the Indian market in 2002 and is one of the largest investor-owned power businesses in Asia. They partnered with WPP-owned Landor & Fitch to rebrand the company – changing the name to Apraava Energy and adopting a dynamic, new brand identity system. This is possibly India’s first generative design system and we covered the case study here.

The French energy company Total announced a corporate rebrand to TotalEnergies with a new business model that goes beyond oil and gas to include renewable energy — wind, solar, green hydrogen, among others.

If you played an MP3 in the 1990s, it was probably on Winamp. Still in beta, the much-loved media player, known for its gorgeous skins, has re-launched with a new identity and an emphasis on streaming.

Although more rare, there are also instances when a corporation decides to adopt the name of a portfolio brand. We saw this recently with the rebrand of the Fosun Fashion Group, which owns the fashion label Lanvin. The group rebranded itself to the Lanvin Groupe, to draw on the equity of its well-recognised brand.

No, the jewellery brand didn’t change its logo or its signature blue colour, but it made a bold attempt to shift its brand positioning through a campaign that proclaimed it was “Not your Mother’s Tiffany.” Of course, the campaign angered older customers, but it got the attention and buzz that a less controversial campaign may not have.

Did we miss someone? Let us know in the comments? Look out for Part 2 of this series next week