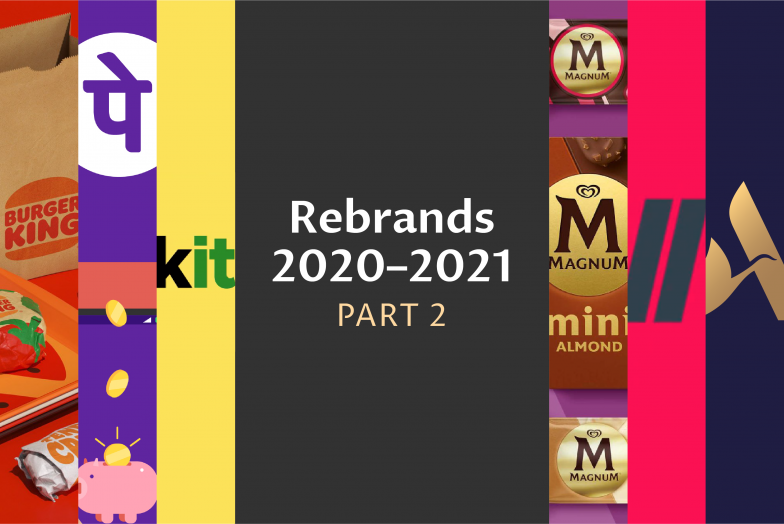 The two big trends you will see in this second list of rebrands in 2020-21 are:

Do remember that while we only have space to showcase the logo, each of these were comprehensive, strategically-driven exercises that meant reconfiguring every brand interface.

While the common myth is that it is easier to change brand identity in the digital world versus the offline world, the truth is that it requires far more focus to scrub remnants of a brand’s digital footprint from the Internet, as this story on the Reckitt rebrand shows.

ClearTax launched in 2011 as a tax filing portal but grew quickly to offer a gamut of financial services and it was time to get rid of the limiting suffix. ‘Clear’ is a difficult word to own from the SEO perspective and the company continues to keep cleartax.in as its main url.

Kotak rebranded their zero-savings account and repositioned it as a neobank. The identity was done by Delhi-based studio, Animal.

When you service a massive tranche of Indians and have both offline and online channels, a rebrand is never easy, but PhonePe pulled it off. We did a deep dive into their new brand positioning and brand identity (done by Gurgaon-based design studio Codesign) and these case studies are a must read.

Standard Chartered said that their rebrand was necessitated by ‘digital transformation.’ Carried out by the London and Hong Kong offices of Lipincott & Partners, the exercise launched a stripped-down, more modern version of the well-known mark. The well-known slogan, ‘Here for good,’ changed to a bolder ‘Good ain’t good enough.’

While we saw a surge of new D2C consumer brands, we didn’t see too many large brands change in India. There is, however, definitely a movement amongst global brands to up their packaging games.

This very clever rebrand by J Knowles Ritchie saw a new, playful and dynamic identity for the ice-cream brand. Spot it? Look at the packs closely.

Campbell saw its first redesign in 50 years, but it was far from radical. The logo was tweaked and the iconic cans saw a more modern layout. We guess it is hard to mess too much with packs that have been immortalised by Andy Warhol.

Haagen Dazs has always been premium and its latest redesign, carried out by New York-based Chase Design Group, maintained the luxury cues. The exercise saw a tweaking of the cartouche logo, but more importantly the addition of a stained glass-like background that changes according to flavour, but integrates the range.

Designed by UK-based agency, Sunhouse, the iconic ice-cream bar completely changed its packaging and brand expression. The exercise was driven by the many copy-cats in the market, and the need to re-establish Magnum as the original chocolate bar.

The famous Sticky Notes brand joined the flat design brigade, quietly rolling out a more modern logo, without fanfare or explanations about a new strategy.

The iced-tea brand dropped its glass bottle and adopted a plastic one, although it is one made entirely from recycled materials. The label also moved firmly away from its longstanding retro look to a more modern one. The change was met with widespread consumer outrage – but we hear Snapple has no plans to bring the glass bottle back.

FMCG giant Reckitt Benckiser rebranded to Reckitt in March 2021 – the company’s second rebrand in the last decade. In 2014, the then CEO, Rakesh Kapoor, announced that the name would change to ‘RB’ because Reckitt & Benckiser was a “mouthful.” The return to ‘Reckitt’ was seen as an embracing of its heritage and was a move that most people welcomed.

We wrote a great story about all the things they missed with the rebrand.

After changing their logo in May 2021, Grofers moved to a rapid delivery model and a new brand – Blinkit.

Shangri-La marked their 50th anniversary with a logo tweak, which consisted of a richer gold and more elegant wordmark. Interestingly, the brand also opted not to include ‘Hotels and Resorts’ in the refreshed logo, recognising that Shangri-La is not just a physical location, but a ‘feeling and an experience that inspires personal moments of joy.’

Pfizer undertook a massive rebranding exercise to move away from the idea of ‘pharmaceuticals’ and embrace ‘science’ as its brand core. The new narrative and identity, developed by New York-based Team Design, was accompanied by the slogan ‘Breakthroughs that change patients’ lives.’

The much-hyped audio social network made its debut with just the 👋🏽 emoji as its logo. As numbers started to fall, Clubhouse launched a more grown-up logo, crafted by Cooper, New York. It continues with its strategy of using creator faces for its app icon.

2021 was the year that Discord was firmly established as the social network for creators. The company had recognised that the shift was happening and carried out a repositioning exercise in 2020, to move away from its ‘gamers only’ perception. The initiative was accompanied by a new logo and slogan – ‘Your place to talk.’

We ran a great story on how brands should think about Discord.

The global freelance marketplace for digital services re-hauled its UX and the exercise also involved a new logo and colour palette.

This was the Big Daddy of all rebrands – with Facebook announcing a holding company called Meta that would be dedicated to building the metaverse.

This is what happens when your ambitions exceed the brand stretch of your product and we covered the complex relationship between corporate and product brands here, along with a handy, decision-making framework.

Freelance marketplace Upwork carried out an intensive exercise to understand how they should position their product as the future of work evolves. As a result, they launched a Work Marketplace, which addresses the needs of enterprise clients. The move was accompanied by a new identity, campaign and slogan – “Get it Done with a Freelancer.”

Both the rebrand and campaign were developed and implemented by creative agency Alto in collaboration with Brooklyn-based design agency Porto Rocha.

This was Burger King’s first rebrand in over two decades. Carried out by J Knowles Ritchie, it aimed at making the brand feel less synthetic and artificial and more real and tasty.

Hot on the heels of the Burger King rebrand, came a new look for McDonalds. The iconic Golden Arch logo was unchanged, but the brand rolled out modern new packaging with vector-style illustrations, aimed – you guessed it – at making fast food less fast.

The pizza chain moved to a simpler design, getting rid of embellishments in its logo and packaging. The biggest change, however, was the removal of the apostrophe, which seems to be a move to distance the brand from founder John Schnatter, accused of making a racial slur.

In yet another case of moving beyond the functional, Thyssenkrupp Elevator rebranded to TKE. The move followed a sale of the business to a private equity consortium. The rebranding exercise was carried out by Hamburg-based agency, Loved.

After its acquisition by private equity firm, Barings, NIIT Technologies was rebranded to Coforge.

After its acquisition by German group Allgeier in 2011, software company Nagarro spun off in the public markets from their parent company. This led to a new brand identity, created by their in-house team and we covered it here.

After a repositioning exercise by Ray+Keshavan in 2014 (THC founder Meeta Malhotra was a partner at R+K and closely involved in this), software development company Thoughtworks, was acquired by private equity firm Apax Partners in 2017. The company listed in the public markets in September 2021 and carried out a brand refresh just before their debut.

The software company, previously called UST Global, consolidated all its operations and subsidiaries under one brand – just UST, without the ‘Global’ suffix. The move was accompanied by a modern, new brand identity.

The 3D design and engineering product firm announced a new brand identity along with the news that it was ‘reimagining its brand.’

The cloud-based scheduling platform launched a new identity designed by Pentagram, to reflect a leap in its product in terms of design and experience. There was a brief blip when the new logo was compared to a toilet seat, but like all logo gladiator games, this controversy too died down.

Canva said it changed its identity because it needed its 9 year-old logo to ’flex across more applications, from tiny buttons to huge billboards.’ The in-house brand team collaborated with type designer and lettering artist, Rob Clarke to create the new wordmark, removing the flat-colour circle and adding a gradient, which is used as a signature visual device across interfaces.

Customer retention software, CleverTap, launched a new identity to signal that the brand was ready for global expansion.

Google faced a backlash when it changed its icons – read our excellent story here. Its new logo for Google fonts, however, has been met with wide approval. The rather dull ‘F’ monogram was replaced with a smart composition of overlapping glyphs and shapes, more in keeping with the overall colourful identity of Google products.

Microsoft rebranded its cloud operating system from Window Azure to Microsoft Azure. The objective was to showcase Azure’s cross-platform capabilities and made perfect sense, since nothing ties Azure to Windows.

TransferWise rebranded to Wise, dropping the money-moving focus of its brand and cueing a wider array of financial service products.

SurveyMonkey announced a new name Momentive, which became both the parent company and the name for its enterprise business.

After stratospheric growth, Xiaomi dropped the ‘Mi’ brand from its premium range of devices.

We asked Jayadevan PK , Author of Xiaomi: How a Startup Disrupted the Market and Created a Cult Following, for his take and this is what he said:

“As a Chinese company with global ambitions, it made sense to use ‘Mi’ ten years ago when most people didn’t even know to pronounce Xiaomi. Now, it is the world’s largest smartphone maker and a well-recognised brand. It makes sense to bring some consistency, do away with the Mi sub brand and make all brand investments into one name both in China and overseas.”

So far and surprisingly, no change has been announced to the ‘Mi’ logo, which was redesigned by Kenya Hara in 2020. Founder, Lei Jun, has gone on record to say that ‘Mi’ stands for both Mobile Internet and Mission Impossible.